Venezuela's Maduro halts talks with opposition after US sanctions 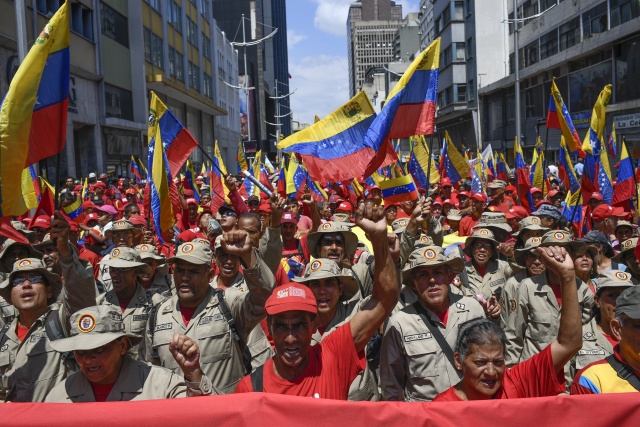 Pro-government protesters rally against US sanctions with Venezuelan national flags in Caracas on August 7, 2019. Washington warned China and Russia to avoid doing business with the Venezuelan regime of Nicolas Maduro, as delegates from some 60 countries discussed ways of ending the crisis in the South American nation. The admonition Tuesday came a day after President Donald Trump ordered a freeze on all Venezuelan government assets in the United States and barred transactions with its authorities. (Federico Parra / AFP)

(AFP) - Venezuelan President Nicolas Maduro blamed Washington on Wednesday in cancelling scheduled talks with the political opposition, as his embattle regime struggles under the weight of US sanctions.

The oil-rich leftist regime has been hurt especially hard since US President Donald Trump on Monday ordered a freeze on all Venezuelan government assets in the United States and barred transactions with its authorities.

Maduro "has decided to not send the Venezuelan delegation" for talks Thursday and Friday mediated by Norway in Barbados with representatives of opposition leader Juan Guaido, a government statement read.

Maduro attributed the cancellation to "the grave and brutal aggression" being "continuously... carried out by the Trump administration against Venezuela, which includes the illegal blocking of our economic, commercial and financial activities," the statement read.

Trump's measures were just the latest in a string of sanctions imposed on the Maduro regime in a bid to force the socialist leader from power.

The crisis-wracked country has been mired in a political impasse since January when Guaido, speaker of the National Assembly, proclaimed himself acting president. He is now recognized as Venezuela's leader by more than 50 countries.

In the talks Guaido has called for new elections, while Maduro, who retains support from Venezuela's military, is calling for a "democratic cohabitation" and refuses to leave office.

In Caracas, thousands of government supporters dressed in red and waving Venezuelan flags marched against the US sanctions.

Washington has threatened to "use every appropriate tool" to oust Maduro, and warned Venezuelan allies Russia and China on Tuesday against doing business with the regime.

China responded to the sanctions by telling the US to stop "bullying" other countries.

Made up mostly of civilian militia and public sector employees, the crowd chanted: "Yankee go home!" and "Hands off Venezuela!"

Trump "is nervous, he's anxious, he's power-hungry, he wants to get his hands on Venezuela," she added.

Speaking at a small meeting in the east of Caracas, Guaido insisted the US sanctions would affect only top regime officials and not the general population.

"They're against the regime, against Maduro, the product of arrogance," he said as he called for the release of opposition legislator Juan Requesens, who was arrested a year ago and is accused of being behind an alleged drone attack against Maduro.

Venezuela's opposition considers Maduro a usurper over his re-election last year in a poll widely viewed as rigged.

General » Be a reporter: Write and send your article » Subscribe for news alert
Tags: Venezuela, US, politics, diplomacy, sanctions