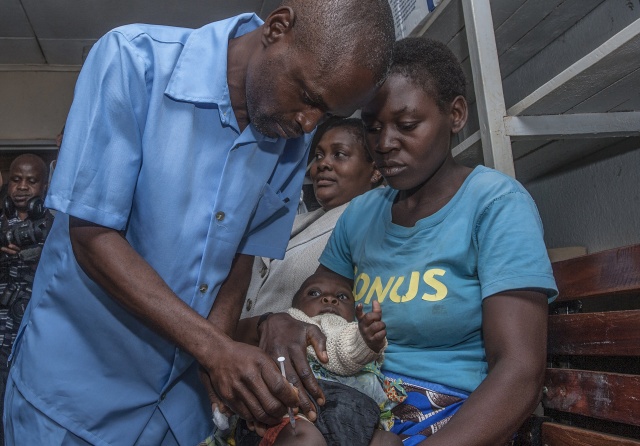 A Health Surveilance Assistant (HAS) prepares to give malaria vaccine to a child as Hanifa Likaka (C), a Senior Nursing Officer and Matron for the vaccine launch venue hospital, assists in removing a child's trousers for easy injection April 23, 2019 at Mitundu Community hospital in Malawi's capital district of Lilongwe on the first day of the Malaria vaccine implementation pilot programme in Malawi aiming to immunise 120,000 children aged two years and under to assess the effectiveness of the pilot vaccine and whether the delivery process is feasible. Malawi spearhead today large scale pilot tests for the world's most advanced experimental malaria vaccine in a bid to prevent the disease that kills hundreds of thousands across Africa each year. After more than three decades in development and almost $1 billion in investment, the cutting-edge trial will be rolled out in Malawi's capital Lilongwe this week and then in Kenya and Ghana next week. (AMOS GUMULIRA / AFP)

(AFP) - Malaria has killed more than 1,800 people in Burundi this year, the UN's humanitarian agency says, a death toll rivalling a deadly Ebola outbreak in neighbouring Democratic Republic of Congo.

In its latest situation report, the United Nations Office for the Coordination of Humanitarian Affairs (OCHA) said 5.7 million cases of malaria had been recorded in Burundi in 2019 -- a figure roughly equal to half its entire population.

Of those cases, a total of 1,801 died from the mosquito-born disease in Burundi between January 1 and July 21, OCHA said.

The tiny country of 11 million people in the African Great Lakes region has still not declared a national emergency, despite OCHA saying the outbreak crossed "epidemic proportions" in May.

"The national malaria outbreak response plan, which is currently being validated, has highlighted a lack of human, logistical and financial resources for effective response," OCHA said in its latest weekly bulletin on humanitarian emergencies.

"All stakeholders, including the national authorities and partners are called upon to provide the requisite resources to mount a robust response to this event before it escalates."

A lack of preventative measures like mosquito nets, climatic changes and increased movements of people from mountain areas with low immunity to malaria were driving the crisis, OCHA said.

A World Health Organisation (WHO) official told AFP that "the decision to declare an epidemic is the sovereignty of the Burundian state".

The country declared a malaria epidemic in March 2017, when the country had recorded 1.8 million cases and 700 deaths, but was resisting doing the same now.

A senior government official, who declined to be named, said the government did not want to admit weakness with elections set for 2020.

"We are less than a year away from the presidential election. (President Pierre) Nkurunziza, who is facing many crises, does not want to recognise what could be considered a failure of his health policy," the official told AFP.

Burundi has been in crisis since 2015, when Nkurunziza ran for a third term and was re-elected in elections boycotted by most of the opposition.

At least 1,200 people were killed and more than 400,000 displaced in violence the UN says was mostly carried out by state security forces.

Nkurunziza announced in 2018 that he would not stand again, confounding critics who accused him of working to extend his grip on power.

UN investigators said in July that "drastic" steps were needed to boost democratic freedoms in Burundi if the government wanted the elections to be considered credible.

Burundi, one of the poorest countries in the region, abuts DR Congo, where the second-worst Ebola outbreak in history has killed more than 1,800 people amid fears the infectious fever could spread beyond its borders.

But malaria is a much bigger killer on the continent.

The WHO recorded nearly 220 million cases of the parasitic illness in 2017, with an estimated 435,000 deaths. More than 90 percent of malaria cases and deaths were in Africa.