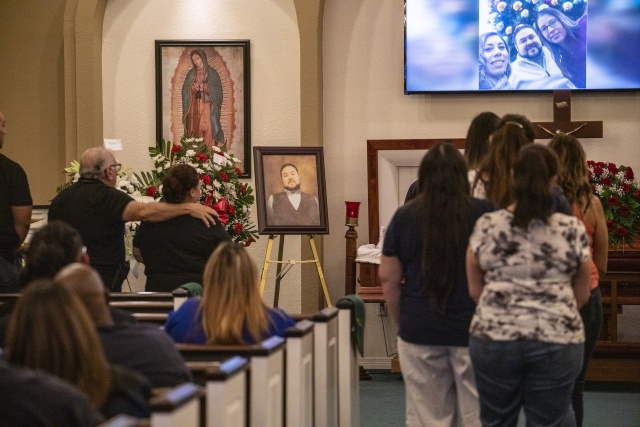 Friends and family of Leonardo Campos Jr. attend his rosary at Sunset Funeral Home in El Paso, Texas on August 8, 2019. Leonardo and his wife Maribel were killed in the domestic terrorist attack at a Walmart on the morning of August 3. The El Paso community is still reeling from the trauma of the mass shooting which left 22 dead and dozens injured. (Paul Ratje / AFP)

(AFP) - Pressure built on the US Congress to pass tough gun control legislation Thursday as the mother of the man arrested for the slaughter of 22 people in El Paso, Texas said she had called police out of concern he had a military-style weapon.

But President Donald Trump and most Republicans continued to rebuff calls for action against an epidemic of mass shootings, conscious of the importance of gun owners to the party in next year's national elections.

The White House, meanwhile, was accused of using the two shootings last weekend to promote Trump, after it released a video of his visit to hospitalized shooting victims. An aide gushed it showed him being greeted like a "rock star."

Lawyers for the mother of Patrick Crusius, the accused El Paso shooter, said she had called police in Allen, Texas weeks before the August 3 attack because she was concerned about his owning an AK-47-type assault rifle.

The lawyers, Chris Ayres and R. Jack Ayres, of Dallas, told CNN that Crusius' mother was worried given her son's age, maturity level and lack of experience with such a weapon.

But a police officer told her that her 21-year-old son was legally allowed to purchase the weapon, and nothing was done about the "informational" call, according to the lawyers.

The news fed into mounting anger in the wake of the back-to-back shootings in El Paso on Saturday and Dayton, Ohio on Sunday, which together left 31 dead and many more wounded. Both attacks were carried out by solitary white men armed with assault weapons.

Speaker of the House Nancy Pelosi, the country's most senior Democratic politician, wrote a letter to Trump urging him to call the Republican-controlled Senate back from its summer break to consider "gun violence prevention" legislation.

In an open letter, 214 US mayors made the same demand.

Their letter, addressed to Senate Majority Leader Mitch McConnell and senior Democrat Chuck Schumer, noted there have been more than 250 mass shootings in the United States this year.

"The tragic events in El Paso and Dayton this weekend are just the latest reminders that our nation can no longer wait for our federal government to take the actions necessary to prevent people who should not have access to firearms from being able to purchase them," the letter said.

Like Pelosi's letter, the one from the mayors pointed to two background check bills passed by the House that McConnell has essentially blocked from consideration in the Senate.

McConnell indicated Thursday he would not reconvene the Senate, saying lawmakers would have "bipartisan discussions" and "when we get back, hopefully be able to come together and actually pass something."

Pelosi and Schumer spoke on the phone with Trump later Thursday, and said the president "gave us his assurances that he would review the bipartisan House-passed legislation and understood our interest in moving as quickly as possible to help save lives."

Trump said Wednesday that he supported legislation to block gun sales to people with mental health issues, but did not endorse stronger measures.

"I can tell you there is no political appetite for that at this moment," Trump said.

Those measures include universal background checks for all gun sales contained in the House measure, and bans on the assault rifles used in many mass shootings.

The head of America's powerful gun lobby on Thursday rejected tougher restrictions on firearms, saying they would not have stopped the shootings in Texas and Ohio.

"The NRA opposes any legislation that unfairly infringes upon the rights of law-abiding citizens," Wayne LaPierre said in a statement.

Meanwhile, Trump was assailed for using his Wednesday trip to the sites of the two shootings to promote himself.

Trump visited hospitals in El Paso and Dayton and the White House released photographs and video footage showing doctors and nurses applauding him.

"The President was treated like a Rock Star inside the hospital, which was all caught on video. They all loved seeing their great President!" tweeted Dan Scavino, the White House social media director.

"The love, the respect for the office of the presidency -- I wish you could have been in there to see it," Trump told journalists.

Protestors against Trump's visit to El Paso said he was not focusing on the victims and the tragedy.

"The only thing we're talking about is Trump right now, we're not talking about the victims, and Trump needed to stay in Washington and get some new ... gun laws," said Bill Cooks.

Democrats slammed Trump, accusing him of exploiting the mass shootings "for his personal gain."

"Innocent Americans were slaughtered. And you spin a presidential visit like a vanity project," said New York legislator Hakeem Jeffries.

General » Be a reporter: Write and send your article » Subscribe for news alert
Tags: US, shooting, politics