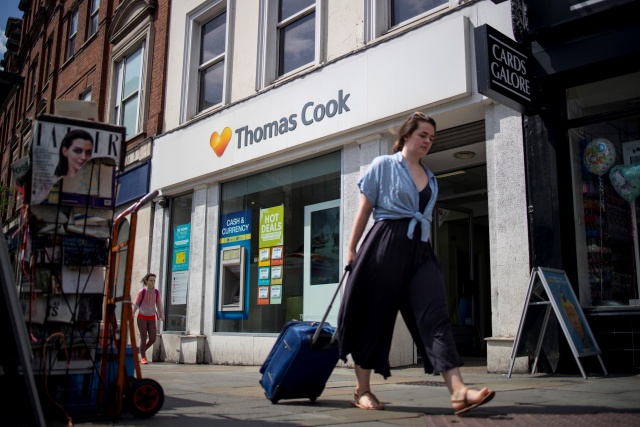 Pedestrians walk past a branch of a Thomas Cook travel agent's shop in London on July 12, 2019. China's Fosun Group is considering nearly a billion dollar rescue of embattled British tour operator Thomas Cook, the Hong Kong-listed conglomerate confirmed Friday. The Chinese company said in a stock market announcement that there are "ongoing advanced discussions" about a capital injection which would see a debt-for-equity swap at the British travel agency, which has struggled with its debt pile. (Tolga Akmen / AFP)

(AFP) - Nearly one million people were affected by a major power outage for several hours across areas of England and Wales on Friday, including parts of London, causing rush-hour transportation chaos.

"This evening we had an unexpected and unusual event, the loss of two generators that connect to the GB transmission system, which led to a fall in the frequency of the electricity system," National Grid said on Twitter.

But the power outage led to many delays and cancellations of trains on Britain's national rail network.

National Rail said the disruptions would continue on Friday and into Saturday morning "due to trains and traincrew in the wrong locations."

It also affected road travel, with traffic lights not working on London streets. Air traffic was disrupted at the airport in Newcastle.

According to power utilities around the country, nearly one million people had to grapple with the blackout, including 300,000 in London and southeast England and 500,000 in the Midlands, southwest England and Wales. Some 110,000 were affected in Yorkshire and northeast England.

The British energy regulator Ofhem has called for the National Grid to provide an urgent and detailed report on the incident.