Seychelles’ main reservoir to increase in capacity by 2018 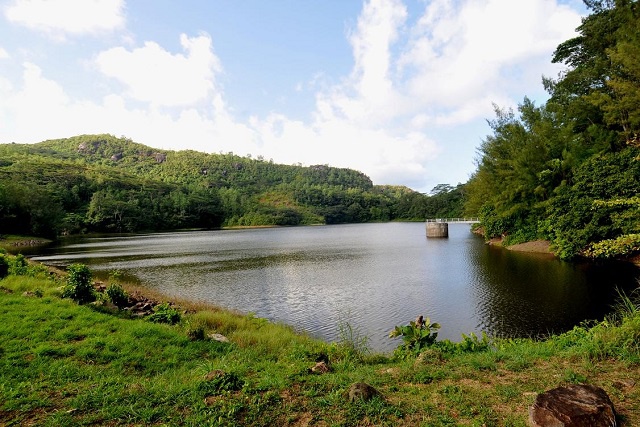 (Seychelles News Agency) - January is the peak of the rainy season in Seychelles, an archipelago of 115 islands in the Indian Ocean, which records an average annual rainfall of 2,200 millimetres.

Water scarcity, a worldwide phenomenon is not uncommon to the island nations’ population of around 90, 000 people, but this is more evident during the dry season when the southeast trade winds kick in, from May till September.

Changing weather patterns over the years have seen the dry spells lasting longer, which coupled with an increase in the number of households and development, notably in tourism, has increased demand for water.

To ensure that there is enough of this scarce resource to last the dry season, the archipelago’s Public Utilities Corporation (PUC) enforces water restrictions.

This year for example, a "moderate" water rationing programme, was announced since August 01, mainly in the northern region of the main island of Mahé as a precautionary measure considering some two months remain before the dry season ends.

This is now that the water level in the La Gogue dam, the main reservoir on Mahé is 71 percent full.

Over the years, PUC has undertaken several projects to try and boost the water supply, for example, some 12 years back the company ventured into desalination plants, but the issue of insufficient storage facilities is still constantly raised by the general public.

The latest step being taken to address this problem is the Seychelles government’s plan to raise the level of the main reservoir that supplies water to the population on the Seychelles main island of Mahé, which will see La Gogue dam’s storage capacity increased by 60 percent.

The Chief Executive of PUC, Philip Morin told SNA that the extra storage will also collect much of the water from the dam, which overflows during the rainy season and flows into the sea.

Work on raising the level of La Gogue Dam, is expected to start next year and take three years to complete.

La Gogue Dam built around 1976 in the northern part of the Seychelles main island of Mahé, can presently hold one million cubic metres of water.

It is fed from a small stream in the area, but most of the contribution is raw water transferred by pipeline from Rochon, in the hills south of Victoria, where there is a bigger river by the same name.

Rochon also has a dam, but with a smaller capacity being able to hold only 50,000 cubic metres of water.

Morin said that more recently, PUC also laid a raw water transfer pipeline from Le Niol (a mountainous area north of the capital of Victoria) to feed La Gogue with an extra 5,000 cubic metres of water daily when the water is available.

Referring to suggestions of building a new dam, possibly at Grand Anse in the Western part of Mahé instead of raising the main reservoir, he said “this is an expensive option.”

"A dam at Grand Anse, with a storage capacity equivalent to La Gogue presently, will cost at least 1 billion Seychelles rupees ($82 million) in comparison, raising the level of La Gogue by six metres and increasing its capacity by 60 percent, will cost just 250 million rupees ($20 million). On the question of simple ratio, we are choosing the most economical and sustainable one," said Morin.

In other parts of Mahé, like in the Western part of the island for example PUC captures water from a number of rivers and streams which are fed into large reservoirs and this is occasionally combined with desalinated water to be supplied to the population.

Morin added that Seychelles cannot do without desalination, especially during the dry season and it is for this reason he says that PUC is also boosting its desalination capacity to cope with emergency situations, linked to freak weather patterns.

Morin also told SNA that PUC has to maintain a balance between the water level from the reservoirs and the amount supplied by the desalination.

While work is being done to ensure that there is enough storage it is also a fact that up to 50 percent of treated water is being lost through leakages in the pipes, slowdown of the metres, other faults in the network as well as illegal tapping of water.

Morin told SNA that PUC is aware of the problem, which he said boils down to "money going down the drain."

He added that several international financial institutions such as ‘Agence Francaise de Developpement’ (AFD) and the European Investment Bank (EIB) have agreed to assist PUC with soft loans to address water issues in the country.