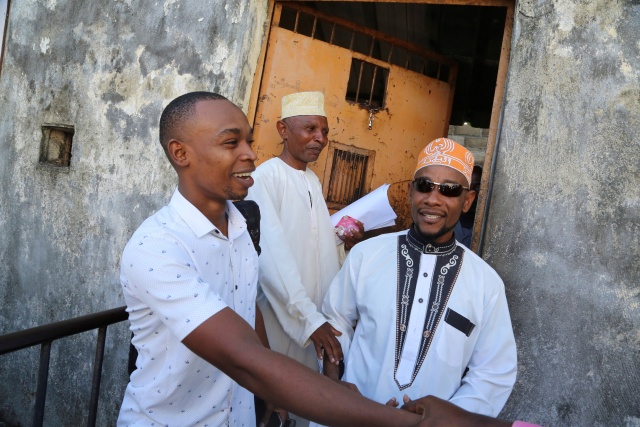 Journalists Oubeid Abdillah (L), Abdallah Hassane (R) and several other political prisoners gather after their release from the main prison in Moroni, Comoros on May 29, 2019. (Ibrahim YOUSSOUF / AFP)

The four were jailed for life for attempting a coup and threatening state security but had their terms reduced to 20 years in May when 17 other jailed opponents were pardoned.

The charges were linked to unrest that followed a controversial constitutional referendum to extend the president's term last year.

Bahassane is the younger brother of Jaffar Ahmed Said Hassani, a former vice-president to Azali now living in exile in Tanzania after denouncing the president's authoritarianism.

The pardons follow Azali's re-election in March, in which he pledged "appeasement measures" to quell accusations of voter fraud.

He was credited with nearly 60 percent of the ballot, an outcome rejected as fraudulent by the opposition.

Comoros has had a volatile political history since independence in 1975, enduring more than 20 attempted coups, four of which were successful.

He was re-elected in 2016 in a vote marred by violence and allegations of irregularities.