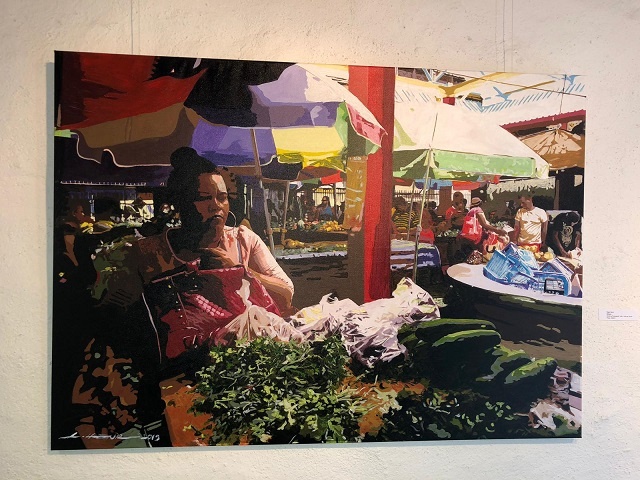 Among the paintings on exhibit is Henri's piece showing the hustle and bustle of the Victoria market. (Nigel Henri)

The pieces were part of his exhibition held there from June 16 to July 14 this year.

“I am proud of this. My artwork will be permanently displayed at this museum where many will visit, and my hope is that this will inspire younger artists in Seychelles,” said Henri.

He told SNA that despite Seychelles being a small island nation, such an achievement goes to show that the country has already made it into the international art circle.

During the four-week-long exhibition, visitors got to see 43 paintings by Henri. Inspired from an early age by his environment and experiences, Henri’s eye for colour and form captures and conveys the richness of specific aspects of Creole culture and island life.

Henri was informed five years ago by the museum that he had been chosen to exhibit there and that the theme of his work would be ‘Underwater’. This came after his artwork had been studied closely and it was deciding that this is the area in which he excels.

The artist chose to show an array of styles which show his development as an artist during the over 40 years he has been painting. Walking through the exhibition, visitors had the chance to see the vibrant colours of the market place in Victoria, the capital, and the diversity of the Seychellois people.

He expressed that exhibiting in such a museum feels like taking part in the Olympics for an artist.

He feels that having exhibited in over 45 international solo and collective exhibition and countless local ones paved his way to where he is today. Internationally, his work has been displayed in many African, Asian and European countries and locally, his painting hangs in the arrival lounge of the airport, in banks and in hotels.

Speaking about the exhibition at the Zündorfer Wehrturm museum Henri said that such exposure was not just for him but for Seychelles as a whole.

“It is not about Nigel Henri, it is about my country. It will help with the marketing of Seychelles as a tourist destination, and as we know, the German market is very good here.”

He wishes to see other artists follow in his footstep, getting recognition on the international platform and making the archipelago proud.