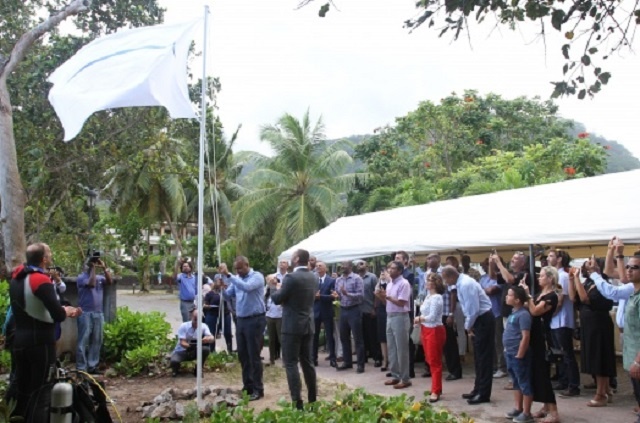 (Seychelles News Agency) - Forty more beaches in Seychelles are being considered for the White Flag certification, meaning that these areas will be recognised internationally as having clean seas.

The President of the Ocean Alliance Conservation Member (OACM), Kristijan Curavic, made the announcement on Tuesday after meeting with President Danny Faure at State House.

Curavic said that “discussions with the president is to certify 40 to 80 beaches in Seychelles. That is the biggest number of beaches committed by any country.” According to Curavic in the next two months, these beaches will be identified and revealed.

In September last year, the island nation’s first White Flag was put on Beau Vallon beach – a popular beach with visitors - in the north of the main island of Mahe. The White Flag indicates that the zone is among the world’s first Certified Safe Marine Areas.

The certification recognises the beach as having been physically cleaned from plastic and other marine debris. Since its launch in Monaco in 2012, White Flag International has become a leading symbol representing clean, plastic-free zones for inhabitants and tourists, as well as the marine life.

Seventy-nine beaches across the world have been designated with the White Flag.  The island nation is a member of the OACM group and Certified Safe Marine Area (CSMA) is now eligible for financing to develop more sustainable tourism practices.

White Flag international has developed a financing system which allows contributions to countries that are implementing national laws and are committed to environmental protection in the tourism sector.

“Seychelles is now certified as a top tourist environmental destination which means the beaches of Seychelles is certified free of plastic. The islands are being promoted as giving visitors plastic-free beaches and more fundamental clean oceans,” Curavic told reporters.

To proceed with the certification, a group of divers from OACM will be in the country soon to carry out cleaning exercises of beaches, ports, and harbours as well as installing different signboards. The collection of plastic wastes and certified safe marine area signs is only the first step of this process.

”The second step is to make a movie about Seychelles with all the operations happening. This will be presented at the World Oceans Plastic summit next year. We want also to have this initiative promoted to big organisations such as the United Nations, the United Nations Environment Programme and others,” explained Curavic.

Curavic added that the certification of Beau Vallon beach last September was only the beginning and it is now that the real process is starting. More importantly, the maintenance of these zones to ensure that they remain litter- and plastic-free is key for Seychelles - 115 islands in the western Indian Ocean - in keeping its White Flag.