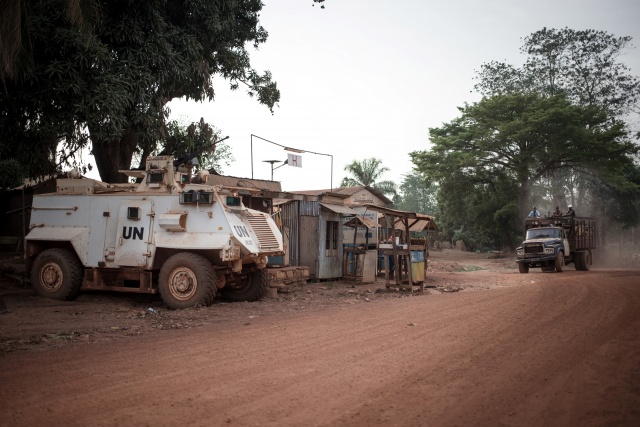 (FILES) In this file photo taken on March 16, 2019 a Minusca armoured vehicle secures the Bambari hospital. The peace deal between the Central African Republic government and rebel groups remains fragile, nearly six months after it was signed. Members of the armed groups who signed the deal have violated international humanitarian law nearly every day since it was signed, said the experts. MINUSCA, the UN peacekeeping mission in the country, had recorded between 10 and 70 violations of the peace deal, every week.(FLORENT VERGNES / AFP)

(AFP) - After years of bloodshed in the poor and largely lawless Central African Republic, renewed hopes of peace are being eroded by the country's militia groups, experts say.

But assaults on civilians and fighting among the militias themselves continue unabated in the provinces, and some armed groups are even misusing terms of the pact to tighten their grip.

A new report to the UN says impediments to peace range from attacks on civilians and humanitarian workers to "doublespeak" from rebel forces, banditry and arms trafficking.

"There is little evidence to demonstrate that there has been a significant change in the behaviour of combatants or that leaders have made efforts to identify and discipline those responsible," according to the report, authored by experts.

The panel was founded to advise the UN on enforcing sanctions on the CAR, including travel bans on targeted individuals, the freezing of assets and an arms embargo.

The CAR has been struggling to recover from the bloodletting that broke out when former president Francois Bozize, a Christian, was overthrown in 2013 by mainly Muslim Seleka rebels.

Former colonial ruler France intervened militarily under a UN mandate, pushing the Seleka from power, and a UN peacekeeping mission was set up to help stability.

But the country is still engulfed in regular clashes and armed groups control about 80 percent of the country.

Murders, rapes, hold-ups, kidnapping and arbitrary detention account for anything between 10 and 70 violations of the CAR peace agreement recorded each week by MINUSCA, the 15,000-strong UN stabilisation force in the country.

The only force capable of rapid deployment across the country to tackle violence, MINUSCA favours dialogue over military action, critics say, especially since the latest peace accord was signed.

UN troops intervened in April to clear the supply corridor from the capital Bangui to neighbouring Cameroon, when it was temporarily blocked by militias loyal to Abdoulaye Miskine.

But no military action was taken against militia of the force known as "3R" (Return, Reclamation and Rehabilitation and Force) who massacred 46 civilians in the northern town of Paoua on May 22. The 3R arms trafficking lines to obtain weapons from Chad are detailed in the report.

3R leader Souleyman Bi Sidi, alias "Abbas Sidiki", is one of several leaders named by the experts for attempting to use provisions of the peace pact, "in particular the establishment of joint security units, as a way to legitimise their control over parts of the country."

The Paoua massacre will not be forgotten, Mankeur Ndiaye, the UN special representative in the country has pledged, adding that the UN is putting pressure on those responsible.

Although they faced possible prosecution, several leaders of armed groups were integrated into the new "inclusive" government formed on March 3, as part of the peace agreement signed in the Sudanese capital Khartoum.

Yet, according to the report issued last month, some of these leaders are reluctant to respect the provisions of the agreement.

One of the biggest blanks is their participation in a "disarmament, demobilization, reintegration and repatriation" programme -- a keystone initiative launched last December aimed at dialling down tension and returning militiamen to civilian life.

More than 450 militiamen belonging to smaller groups have been disarmed in the west, an area where government authorities are slowly regaining control.

But disarmament will be more complex in the central regions.

These are occupied by the two most powerful armed groups: the former Seleka militia the Popular Front for the Rebirth of the Central African Republic (FPRC) led by Abdoulaye Hissene and Nourredine Adam, and the Union for Peace in Central Africa (UPC) commanded by Ali Darassa.

"The FPRC made multiple declarations of peace, but does not intend to disarm its men," one FPRC source said.

MINUSCA also condemns armed groups in FPRC- and UPC-controlled areas for failing to lift illicit checkpoints where merchants are forced to pay tolls.

"They remove one, then install another one," said Balla Keita, commander of the UN force. As well as illegal tolls, armed groups earn revenue from exploitation of gold and diamond deposits in areas they control.

According to the UN report, the FPRC and the UPC also continue to source war material from the borders of

Ex-Chad dictator temporarily released from jail due to virus