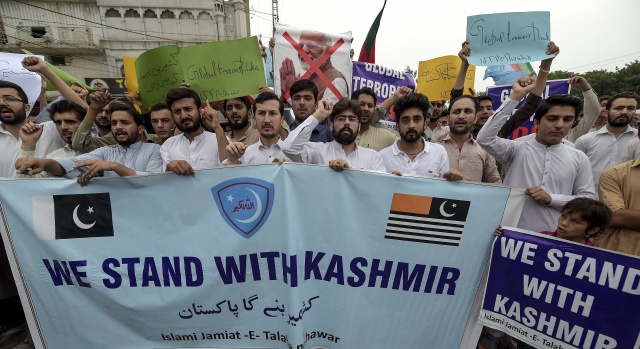 Students of Islami Jamiat-e-Talaba (IJT), a wing of religious political party Pakistan Jamaat-e-Islami (JI), burn a photograph of Indian Prime Minister Narendra Modi during a protest in Peshawar on August 7, 2019. Pakistan announced on August 7 that it is expelling the Indian High Commissioner and suspending bilateral trade with its nuclear-armed neighbour, days after New Delhi stripped the disputed Kashmir region of its special autonomy. (ABDUL MAJEED / AFP)

(AFP) - Prime Minister Narendra Modi hailed on Thursday his "path-breaking" move to strip the restive region of Kashmir of its autonomy, in a tub-thumping speech marking Indian Independence Day.

Parts of Kashmir that India controls -- it is split with arch-rival Pakistan -- have been under lockdown since August 4, with freedom of movement restricted and phones and the internet cut.

A day later New Delhi scrapped Article 370 in the Indian constitution that had granted Kashmir special status, splitting the state of Jammu and Kashmir in two and downgrading them to union territories.

Modi, in a speech from the ramparts of the Red Fort in Delhi, said Thursday that the decision was one of several "path-breaking" moves by his newly re-elected administration.

He said "fresh thinking" was needed after seven decades of failure to ensure harmony in the region.

"We do not believe in creating problems or prolonging them. In less than 70 days of the new government, Article 370 has become history. And in both houses of parliament, two-thirds of the members supported this step," said Modi, 68.

"Jammu-Kashmir and Ladakh will become a big inspiration for India's growth journey, comfort, progress and peace," he said. Ladakh is the newly carved-out union territory.

"The old arrangement in Jammu, Kashmir and Ladakh encouraged corruption and nepotism, as well as injustice when it came to rights of women, children, (low-caste) Dalits, tribal communities," he said.

"Their dreams get new wings," he said.

Pakistani Prime Minister Imran Khan, who has compared Modi's government to Nazi Germany, said Wednesday that time had come to teach Delhi a lesson and promised to "fight until the end" against any Indian aggression.

"The Pakistani army has solid information that they (India) are planning to do something in Pakistani Kashmir, and they are ready and will give a solid response," Khan said in Muzaffarabad, capital of Pakistan-administered Kashmir.

Kashmir has been divided between India and Pakistan since independence from Britain in 1947, and has been the spark for two major wars and countless clashes between the two nuclear-armed arch-rivals.

Fearing protests and unrest over India's latest move, tens of thousands of extra Indian troops have been deployed to Kashmir -- joining 500,000 already there -- turning parts of the main city of Srinagar into a fortress of roadblocks and barbed wire.

University professors, business leaders and activists are among more than 500 people taken into custody in the region, some of them spirited away to other locations around India, according to press reports.

Restrictions have been lifted in the Jammu region, where Hindus are in a majority, according to the government, but remain in place in the Kashmir Valley, the main hotbed of resistance to Indian rule over decades.

"Restrictions imposed in Jammu have been completely removed and schools and other establishments there are functioning," local police official Munir Khan told Indian media.

"Restrictions will continue in some places of Kashmir for some time," he said.

The lockdown has not completely prevented anger bursting out into the open, however.

According to residents around 8,000 people protested after Friday prayers, with security forces firing tear gas and pellet-firing shotguns to break up the rally.

Only on Tuesday did the Indian government confirm that clashes, blaming them on stone-throwing "miscreants" and saying its forces reacted with "restraint".

Footage filmed by AFP on Monday showed hundreds of people protesting in the Soura area of Srinagar, shouting slogans such as "We want freedom" and "India go back" as helicopters buzzed overhead.

Modi's 90-minute speech ended with the prime minister leading chants of "Jai Hind" ("Long live India") with schoolchildren dressed in the saffron, white and green of the Indian flag, before a rendition of the national anthem.