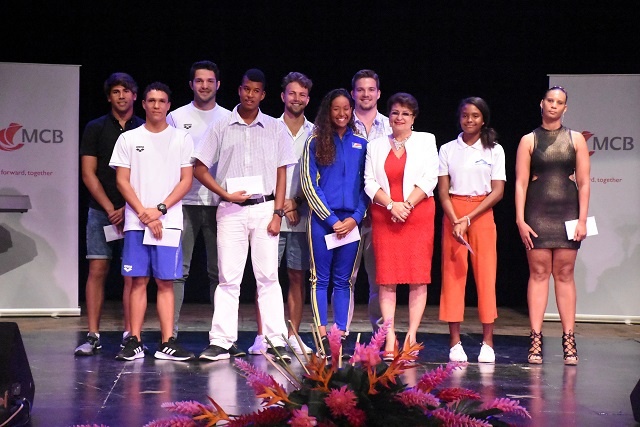 (Seychelles News Agency) - Seychellois athletes who won medals at the 10th edition of the Indian Ocean Island Games in Mauritius received their monetary rewards on Wednesday.

The financial rewards for medal winners is a government incentive to encourage and motivate athletes at international competitions.

Over SCR 2.5 million ($185,600) was distributed among the athletes who brought home medals in a ceremony at the International Conference Centre in the capital Victoria.

“I feel really happy. I feel honoured and I’m really excited by everything that’s happening. I just want to thank everyone for all the support. I really couldn’t have done it without them,” Passon told reporters after the ceremony.

Asked how he felt after receiving the financial rewards, Baccus said, “I see it as a good thing that the government has done because after working hard you need to be rewarded. Like in everything that you do where you make many sacrifices there comes the day that you have to be rewarded.”

In her address at the ceremony, Minister Mondon congratulated all athletes whom she said made maximum efforts to win medals, especially gold.

“Believe and succeed was the motto of team Seychelles for the competition. Seychellois athletes went with positive thinking to believe that yes, they can succeed in bringing medals and that is exactly what many of them did in Mauritius from the 19 to 28 July,” she said.

She added that: “Today I am honouring the commitment I made to you on behalf of the government to reward those who performed better according to the medals you won.”

The chief executive of the National Sports Council, Jean Larue, also congratulated the athletes not only for their performances but the exemplary behaviours they had at the Games.

“Today I am happy because 60 percent of what we achieved was from the young athletes. They went and they showed us that they are able to do perform. Of course, they had the more experienced next to them who helped them grow during the 10 days,” said Larue.

He added that the athletes had said they were going to bring medals and they did and “the work they have done for a long time brought success and for that, they and their parents should be proud.”

Athletes who won gold also received a voucher to the value of SCR 10,000 ($730) from the All Weather Builders company.

The biggest sponsor of Seychelles, a group of 115 islands in the western Indian Ocean, for Games, was the Mauritius Commercial Bank.

The next competition for Team Seychelles is the All Africa Games which will start August 19 in Morocco.