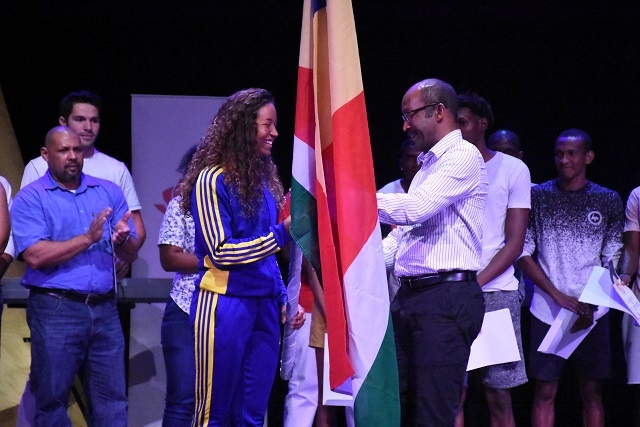 (Seychelles News Agency) - Swimmer Felicity Passon will be the flag bearer for Seychelles at the opening ceremony of the 12th African Games in Morocco from August 19 to 31.

Team Seychelles which is made up of 35 athletes and 13 coaches will compete in seven events -- athletics, badminton, boxing, canoeing, swimming, volleyball and weightlifting.

The Team got its official send-off on Wednesday by the Designated Minister, Macsuzy Mondon, who also holds the portfolio for sports.

She wished all athletes success saying “you can do it – believe and succeed.”

The flag bearer of Team Seychelles, Passon, who had a strong performance in the Indian Ocean Island Games, said, “I am going to carry on this momentum for the African Games. Hopefully, all goes well and I will be able to perform well.”

The 12th edition of the games which will coincide with the commemoration of the Youth Day will serve as a qualifying step for the Tokyo 2020 Olympic Games.

Over 7,000 African athletes are expected to participate in the competition taking place in Morocco for the first time.

In the last games in Congo, Brazzaville in 2015, Egypt topped the medal table with 217 medals among which were 85 gold.