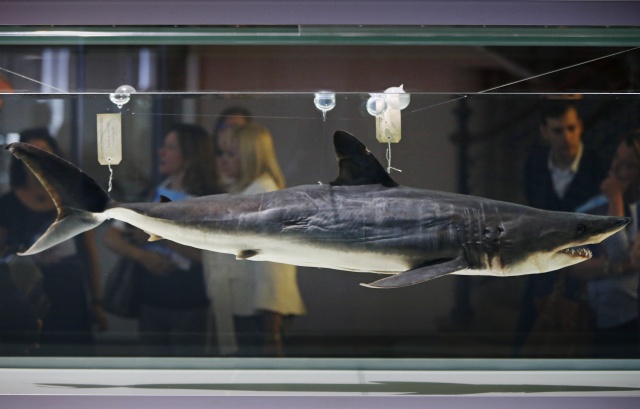 (FILES) In this file photo taken on June 07, 2013 a mako shark, caught 40 miles off the Monaco coast in JUne 2000 is displayed at the exhibition "Requins" (Sharks)in the Oceanographic Museum in Monaco. Dozens of countries will push at a global meeting for regulations on trade in 18 types of shark and ray, with conservationists warning on August 15, 2019 of looming extinction for many species. (Valery HACHE / AFP)

(AFP) - Specialists will meet in Geneva from Saturday to try to tighten rules on trade in elephant ivory, rhino horns and other endangered animal and plant species amid growing alarm over accelerating extinctions.

Thousands of conservationists and policymakers from more than 180 countries will meet for 12 days to evaluate changes to regulations and species protection listings under the Convention on International Trade in Endangered Species (CITES).

The treaty, created more than four decades ago, regulates trade in over 35,000 species of plants and animals and contains mechanisms to help crack down on illegal trade and sanction countries that break the rules.

CITES Secretary General Ivonne Higuero said the conference would "focus on strengthening existing rules and standards while extending the benefits of the CITES regime to additional plants and animals threatened by human activity."

The meeting follows warnings about rapid species decline, with a UN report in May indicating that one million species are being pushed to the brink of extinction.

The devastation caused to many species by poaching and booming illegal wildlife trade will be in the spotlight during the meeting, as will new challenges arising as the illicit commerce increasingly moves online.

As is often the case, the plight of African elephants is expected to dominate the discussions.

Global trade in elephant ivory has largely been outlawed since 1989 after their numbers plunged from millions in the mid-20th century.

The African Elephant Database estimates that by 2015, fewer than 415,000 of the giant mammal remained on the continent.

The CITES meeting, which is held every three years, will consider three competing elephant proposals.

Two proposals from countries in southern Africa, where elephant populations have more protection and are healthier, urge the resumption of ivory stockpile sales.

They argue this could satisfy the demand, especially from Asia, that is fuelling illegal poaching and would provide funds for conservation programmes.

Animal protection activists counter that previous experiments with stockpile sales actually boosted demand for tusks, and more poaching, since it is hard to distinguish between legal and illegal ivory.

"We should not be repeating this again when the poaching crisis is still so severe," Matthew Collis, policy chief at the International Fund for Animal Welfare (IFAW), told AFP.

Several countries in western, eastern and central Africa meanwhile want all elephant populations, including healthier southern ones, to be placed in the most-protected category, effectively barring all ivory sales.

None of the proposals are expected to be voted through however.

Collis said attention should focus on legal and illegal ivory markets that are driving demand, to shut down "avenues for criminals to launder their ivory."

One of 56 proposals on the meeting's agenda aims to prevent traffickers from passing off illegal elephant ivory as coming from mammoths, by listing the long-extinct mammals as a threatened species and thus subject to regulated trade.

CITES scientific chief Tom De Meulenaer said the idea raises interesting philosophical questions about the boundaries of the treaty, but noted that the practice did not seem to be taking place on a large scale.

Southern white rhinos that have been heavily poached in recent years will also figure on the agenda, with Swaziland seeking to sell its existing rhino horn stock.

Collis termed such an idea "disastrous", and "deeply flawed" as there is currently no legal market for rhino horn.

Giraffes are on the agenda for the first time, with a number of African countries calling for a so-called Appendix II listing that would require tracking and regulation of trade in giraffe parts.

The African giraffe population is considered threatened after shrinking by an estimated 40 percent over the past three decades.

But the CITES secretariat voiced scepticism that trade was a major factor behind the decline, which has largely been linked to habitat loss.

Collis questioned this, pointing to US data indicating that in the decade prior to 2015, around 40,000 giraffe parts, mainly bones, had been traded.