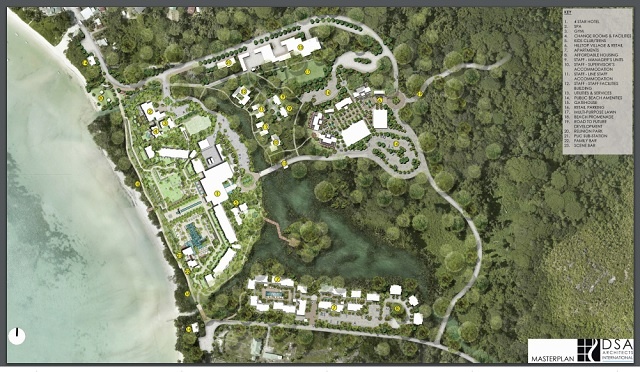 The proposed layout of the mix-use project which will comprise of an area for tourism, retail, residential and entertainment. (Anse La Mouche Development Company Seychelles)

(Seychelles News Agency) - The existing moratorium on large hotels and beach access were some issues raised by Seychelles’ civil society concerning a planned mixed-use project at Anse La Mouche in the west of Mahe, the main island.

Members of the Citizen Engagement Platform Seychelles (CEPS) expressed their concerns on Friday during a scoping meeting for the project titled ‘Anse la Mouche’.

The mix-use project, a first for the western coast of Mahe, will comprise of an area for tourism, retail, residential and entertainment. The first phase will include the construction of a 120-room four-star hotel, road diversion, public amenities on the beach, as well as accommodation for hotel staff among other facilities.

“There is a moratorium in place on the building of large hotels. Rooms cannot be carried over and a moratorium should apply to all of these. We do not need large hotels in the country as the majority of these big hotels along the west coast are never full,” said Marie-Therese Purvis, a member of Sustainability 4 Seychelles (S4S).

Tourism is the top contributor to the economy of Seychelles, a group of 115 islands in the western Indian Ocean.

The tourism minister, Didier Dogley, told SNA on Monday that when the moratorium came into force in 2015, hotels that had already been approved by the government had been exempted.

“Since last year, the ministry has started an exercise where developers of approved hotel concepts are being informed that they have a year to submit their plans and other documents. Should they fail to do so, the allocated number of rooms will be given to new investors who are ready to invest in building the number of rooms,” he said.

Phase one of the project will cost the developers over $75 million and construction is expected to start in 2020.

Purvis further told SNA on Friday that the project has not been very well thought through.

“It will divide the community of Anse La Mouche with the diversion of the road. The additional 700 metres is going to add to people's lives through the burning of fuel for people who have cars,” said Purvis.

The chief operating officer of the Royal Development Company, Andreas Braeuer, said that “the retail, together with two restaurants that will be developed there, will be the new heart of the community and will create a lot of convenience for the people living at Anse La Mouche.”

Braeuer added that “the area is sitting in an already residential community and some of the points raised by previous studies were the lack of convenience retails. There are small shops but there isn't any retail in the form of a supermarket, and the studies also informed that basic community services are lacking such as doctor’s or nurse's office, pharmacy among other things.”

Members of other non-government organisations present also expressed concerns that once the hotel is built the public might not get access to the beach and the ecosystem of the existing marsh in the area will be disturbed.

According to plans of the development, the current road will be closed off to traffic and converted into a beach promenade. The public will have two parking pockets on each end of the promenade where there will also be public beach amenities and reunion parks.

The planned development is currently in the Environmental Impact Assessment (EIA) stage, where consultation with the public is being conducted. On Saturday, August 24, a consultative meeting will be held at the Anse Boileau community centre, starting at 2 p.m.