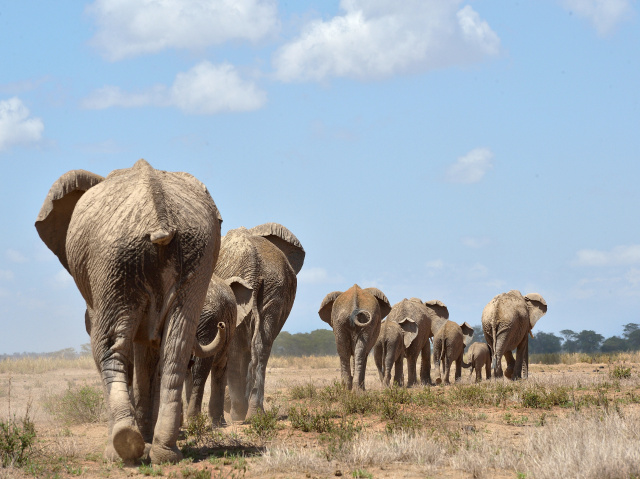 (FILES) This file photo taken on November 13, 2015 shows elephants trooping to a water hole at the Amboseli national reserve at the foot of Mt. Kilimanjaro. Specialists will meet in Geneva from August 17, 2019 to try to tighten rules on trade in elephant ivory, rhino horns and other endangered animal and plant species amid growing alarm over accelerating extinctions. (Tony KARUMBA / AFP)

(AFP) - The regulator of global wildlife trade will likely ban sending African elephants captured from the wild to zoos after countries supported the move Sunday, in what conservationists hailed as a "historic win".

A large majority of countries voted in Geneva to prohibit the transfer of elephants caught in the wild to so-called captive facilities -- a practice animal protection groups have long described as "cruel".

The vote was the first rendered during a 12-day meeting of the parties to the Convention on International Trade in Endangered Species, which kicked off on Saturday with thousands of conservationists and policymakers from more than 180 countries in attendance.

With 46 in favour, 18 against and 19 abstaining, the vote cast in one of two committees secured the two-thirds majority needed to pass, but will still needs to be approved by the full conference before the meeting concludes on August 28.

"This decision will save countless elephants from being ripped away from their families in the wild and forced to spend their lifetimes imprisoned in substandard conditions at zoos," Iris Ho, a senior wildlife specialist with Humane Society International (HSI), said in a statement.

Specifically, the countries voted to limit trade in live wild African elephants only to conservation in their natural habitats, effectively ending the practice of capturing elephants and sending them to zoos and entertainment venus around the world.

While elephants in western, central and eastern Africa have long been listed among the species in need of most protection under CITES, and thus banned from all trade, some trade has been permitted in southern Africa, where elephant populations are healthier.

Zimbabwe has for instance captured and exported more than 100 baby elephants to Chinese zoos since 2012, according to HSI.

"The preliminary decision is a remarkable recognition that elephants don't belong in the entertainment industry," Cassandra Koenen, who heads the wildlife division at World Animal Protection, said in a statement.

"It's a huge step in the right direction."