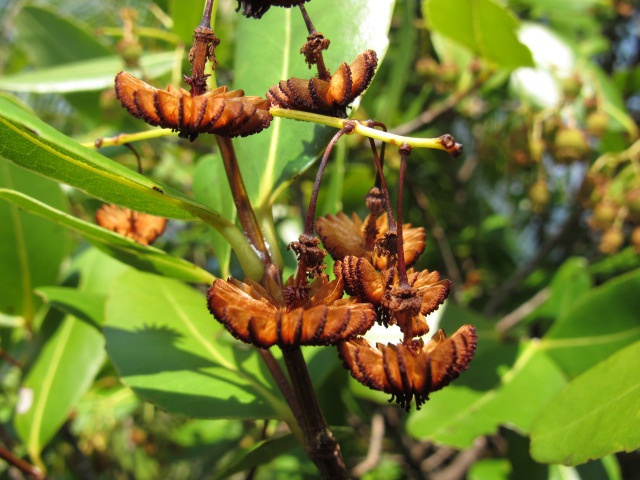 The tree is known as the jellyfish tree as the flowers resemble the tentacles of a jellyfish. (Christopher Kaiser-Bunbury)

(Seychelles News Agency) - Environmentalists in Seychelles are raising concerns over the impact that the construction of a new dam may have on the critically endangered jellyfish trees known locally as bwa mediz.

The new dam in the western district of Grand Anse Mahe is planned in an area where the bwa mediz grows in its natural state.

The plant can only be found in three other locations on Mahe – the main island of the Seychelles – 115 islands in the western Indian Ocean.

The tree is known as the jellyfish tree as the flowers resemble the tentacles of a jellyfish or the snakes that form the hair of the ancient Greek Goddess Medusa, which accounts for its scientific name Medusagyne oppositifolia.

“Bwa mediz is emblematic for Seychelles as once it was considered as one of the rarest plants in the world,” explained local environmentalist Lindsay Chong Seng, who said endemic plants must be protected.

For decades it was believed the species was extinct. No specimen was seen in Seychelles between 1903 and 1970 when it was rediscovered. It remains on the critically endangered list of the International Union for the Conservation of Nature.

Back in 2016, it was estimated that the population of the jellyfish tree was only around a hundred mature individuals.

Bwa mediz can be seen at Bernica – where the new dam is expected to be constructed, and in the mountainous area of Mont Sebert, Mont Copolia and Mont Jasmin on Mahe.

The construction of the dam was announced by the island nation’s utility company in November 2017. The Public Utilities Corporation (PUC) announced that a feasibility study was being done at the site.

An Italian-based company, Studio Pietrangeli, specialising in dam and hydropower engineering and design conducted a comprehensive feasibility study at the proposed site and will provide a report and design for the dam by January next year.

The Director for biodiversity conservation in the Ministry of Environment said that impact on the environment and biodiversity of the area is something that will be given a lot of attention.

“We will assess the quantity of biodiversity in the area and come up with proper conservation protocol,” explained Ashley Dias who added that “all effort will be taken by the government to ensure that endangered plants and animals are not affected.”

Not all is lost for the jellyfish tree as the plant is also being grown and can be found at the National Biodiversity Centre, a 17-hectare centre that acts as an ex-situ conservation area of the rare and endemic species of plants that are only found within the archipelago.

Local conservationists also feel that more efforts and proactiveness are needed to relocate and propagate critically endangered species in other areas of a similar terrain where they exist so that they can thrive. This is needed especially where there is​ the development of major projects such as with the dam.

However, Chong Seng, who is from the Plant Action Conservation Group, is hopeful that the right design of the dam may cause little damage to the species’ existence. “If they are considering a dam of 60 meters high made of earth, this will destroy these trees but if they choose something in concrete or rocks and position it well, then this forest has a good chance.”

When the announcement of this new dam was made two years ago, the chief executive of the utilities company Philippe Morin had told SNA that “PUC is estimating that the dam will be an arch shape made of concrete. We estimate it will be around 40 metres high with a capacity of one million cubic metres.”