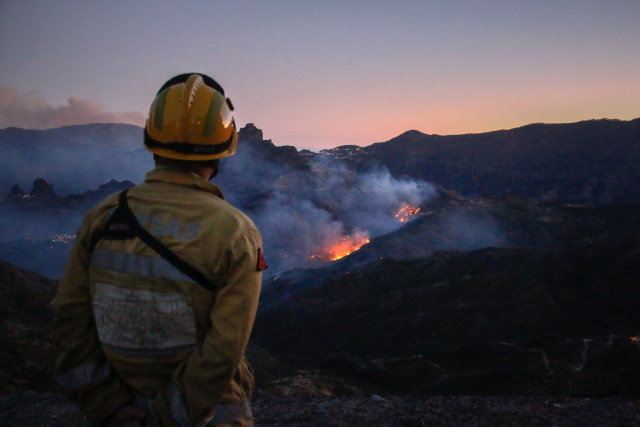 A firefighter observes flames rising from a forest fire near the village of Ayacata in Tejeda on the island of Gran Canaria on August 20, 2019. A fire raged out of control on the Spanish holiday island of Gran Canaria, forcing evacuations as flames rose so high even water-dropping planes could not operate in what was dubbed an "environmental tragedy". (DESIREE MARTIN / AFP)

(AFP) - A wildfire that has raged across vast areas of the Spanish holiday island of Gran Canaria since the weekend has abated as winds have dropped, local officials said Tuesday.

"After going to the (affected) areas at night, experts tell me the fire is subsiding... and losing strength," he said.

"As a result, it went very well last night compared to what we were expecting."

Morales said the impact of the blaze on the island's protected, biodiverse areas had not been as bad as expected.

By Monday, the fire had entered the natural park of Tamadaba, a pristine pine forest seen as one of the "green lungs" of the island.

But it was less virulent than expected, said Morales.

He added the blaze had not reached the Inagua nature reserve, another area of major biodiversity, as initially feared.

Thousands of people have been evacuated and Morales said some of them could be allowed to return to their homes unless the weather conditions deteriorate again.

On Monday, authorities said the blaze had devoured 10,000 hectares (25,000 acres) in the mountainous centre of the island.

Some 1,000 firefighters and other ground crew are battling the blaze, as well as around 15 water-dropping helicopters and planes.

It is the third blaze in 10 days to hit Gran Canaria, which lies at the heart of the Canary Islands, located in the Atlantic off the coast of northwest Africa.

General » Be a reporter: Write and send your article » Subscribe for news alert
Tags: Spain, fire