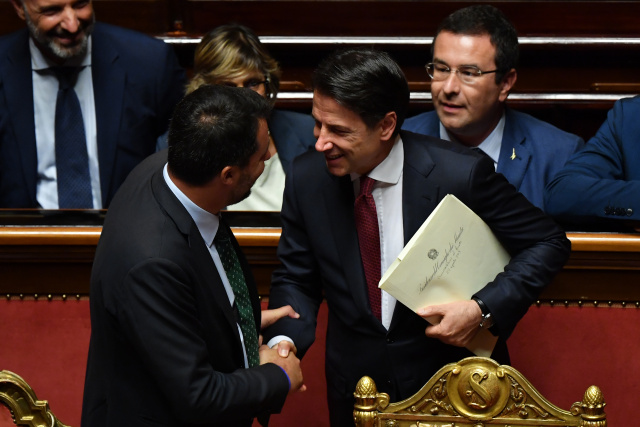 Italian Prime Minister Giuseppe Conte (R) shakes hands with Interior Minster Matteo Salvini (L) upon his arrival to deliver a speech at the Italian Senate, in Rome, on August 20, 2019, as the country faces a political crisis. Interior Minister Matteo Salvini pulled support from the dysfunctional alliance between his far-right League party and the anti-establishment Five Star Movement (M5S) on August 8, 2019 in a bid to capitalise on polls suggesting he would win an early vote. (Andreas SOLARO / AFP)

The usually mild-mannered Conte handed in his resignation after lashing out at far-right Interior Minister Matteo Salvini for pursuing his own interests by pulling the plug on the ruling coalition with the anti-establishment Five Star Movement (M5S).

The move left the eurozone's third largest economy in a political vacuum until Mattarella decides whether to form a new coalition or call an election after talks with parties in the coming days.

Meanwhile Mattarella charged Conte with heading a caretaker administration, pending consultations on a new government which are set to begin at 1400 GMT.

Italy's constitution says that Mattarella should first consult former presidents, meaning Senator Giorgio Napolitano, 94, who was in the job from 2006-2015.

Those talks will be by telephone as Napolitano is not in Rome, and will be followed by talks with house speakers and the leaders of political groups.

"It is irresponsible to initiate a government crisis," Conte told the Senate on Tuesday after Salvini tried to bring down the government in the hope of snap elections that could make him premier.

Salvini plunged Italy into crisis with the shock announcement on August 8 that his anti-migrant League party was pulling out of the 14-month coalition government with the M5S.

The League and M5S agreed for Conte to be premier after lengthy talks before forming a government in June last year.

A range of options are now open to Mattarella, with a new government possible as soon as Friday.

A snap election, the forming of a new coalition without holding a new vote, and -- although unlikely -- the continuation of the current government will all be considered.

"Making citizens vote is the essence of democracy, asking them to vote every year is irresponsible," Conte said as League senators booed and hissed.

The political crisis has raised concerns about the Italian economy, whose debt ratio at 132 percent of gross domestic product is the second-biggest in the eurozone after Greece.

Since the unwieldy government was formed, uncertainty under the coalition has cost the country an extra five billion euros ($5.54 billion) in interest on its debt.

Salvini's plan for a snap election -- more than three years early -- had envisioned a vote in October followed by him being crowned as prime minister.

According to opinion polls, the League could form a coalition with the anti-immigration, anti-LGBT Brothers of Italy, and possibly Silvio Berlusconi's centre-right Forza Italia.

But a bid by his rivals to put aside their differences and forge an alliance could derail Salvini's plan, with a coalition between M5S and the opposition centre-left Democratic Party (PD) being discussed.

While there is bad blood between the two parties, M5S is languishing in the polls and wants to avoid an early election.

Former PD premier Matteo Renzi on Tuesday said that he "would not be part" of a PD-M5S alliance, as many in the anti-establishment party resent him as part of the old elite.

According to some analysts, Conte could also stay on as premier while trying to form an alliance with PD.

General » Be a reporter: Write and send your article » Subscribe for news alert
Tags: Italy, politics