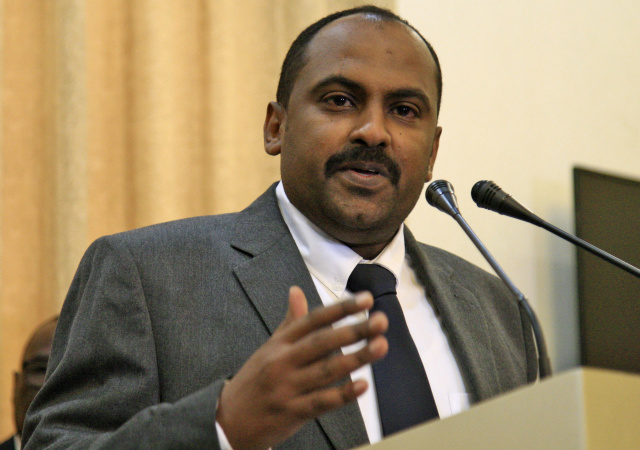 Mohamed al-Fakki Suleiman, a civilian member of Sudan's new sovereign council that will head the country during its three-year transition to civilian rule, speaks during a press conference after being sworn-in, in the capital Khartoum on August 21, 2019. Sudan took further steps in its transition towards civilian rule on August 21 with the swearing in of a new sovereign council, to be followed by the appointment of a prime minister. The body replaces the Transitional Military Council (TMC) that took charge after months of deadly street protests brought down longtime ruler Omar al-Bashir in April. It was the first time that Sudan was not under full military rule since Bashir's coup d'etat in 1989. (Ebrahim HAMID / AFP)

(AFP) - Sudan took further steps in its transition towards civilian rule Wednesday, with the swearing in of a new Sovereign Council and prime minister.

A government is expected to be formed within a week, after which the new institutions can tackle the daunting task of rescuing a failing economy and ending three different internal armed conflicts.

Abdalla Hamdok took the oath as transitional prime minister moments after flying in from Ethiopia, where he spent years working as a senior economist for the United Nations.

"The government's top priorities are to stop the war, build sustainable peace, address the severe economic crisis and build a balanced foreign policy," he told reporters.

Hours earlier, the 11 members of a civilian-majority Sovereign Council were also sworn in, marking the first time that Sudan was not under full military rule since Omar al-Bashir came to power in a 1989 coup.

The body replaces the Transitional Military Council (TMC) that took charge after months of deadly street protests brought down the Islamist ruler in April.

General Abdel Fattah al-Burhan, who already headed the TMC, was sworn in as the new ruling council's chairman.

Wearing his usual green beret and camouflage uniform, Burhan took the oath in a short ceremony, one hand on the Koran and the other holding a military baton under his arm.

He will be Sudan's head of state for the first 21 months of the 39-month transition period, until a civilian takes over for the remainder.

The Sovereign Council includes two women, including a member of Sudan's Christian minority, and it will oversee the formation of a government and of a legislative body.

The inauguration of the civilian-dominated ruling council, which held its first meeting in the afternoon, was widely welcomed but some Khartoum residents warned they would keep their new rulers in check.

"If this council does not meet our aspirations and cannot serve our interests, we will never hesitate to have another revolution," said Ramzi al-Taqi, a fruit seller.

"We would topple the council just like we did the former regime," he said.

The transition's key documents were signed on Saturday at a ceremony attended by a host of foreign dignitaries, signalling that Sudan could be on its way to shedding its pariah status.

Sudan's new rulers are expected to push for the lifting of the country's suspension from the African Union that followed a deadly crackdown on a sit-in in June.

The ruling council will also seek to have the country removed from the US list of state sponsors of terrorism.

Bashir is wanted by the International Criminal Court in The Hague for his role in massacres in the Darfur region, where a rebellion broke out in 2003.

He appeared in court on Monday on corruption charges, for the opening of a trial in which an investigator said the deposed leader admitted to receiving millions in cash from Saudi Arabia.

Pictures of the 75-year-old autocrat sitting in a cage during the hearing instantly became a symbol of his regime's downfall.

The sight of their former tormentor in the dock was overwhelmingly welcomed by the Sudanese, but many warned the graft trial should not distract from the more serious indictments he faces before the ICC.

Sudan's transitional authorities would need to ratify the ICC's Rome Statute to allow for the transfer of the ousted ruler to The Hague.

Amid celebrations of the promise of civilian rule, unease was palpable within the protest camp that brought about one of the most significant moments in Sudan's modern history.

One reason is the omnipresence in the transition of Mohamed Hamdan Daglo, a member of the sovereign council and a paramilitary commander whose forces are blamed for the deadly repression of the protests.

His Rapid Support Forces sprang out of the Janjaweed militia notorious for alleged crimes in Darfur.

Pacifying a country still plagued by deadly unrest in the regions of Darfur, Kordofan and Blue Nile will be one of the most urgent tasks of Sudan's transitional institutions.

The other daunting challenge that awaits the fragile civilian-military alliance is the rescue of an economy that has all but collapsed in recent years.

It was the sudden tripling of bread prices in December 2018 that sparked the wave of protests fatal to Bashir's regime.

Hamdok, who turned down an offer by Bashir to become finance minister last year, said Sudan's economy had great potential but admitted in was in tatters.