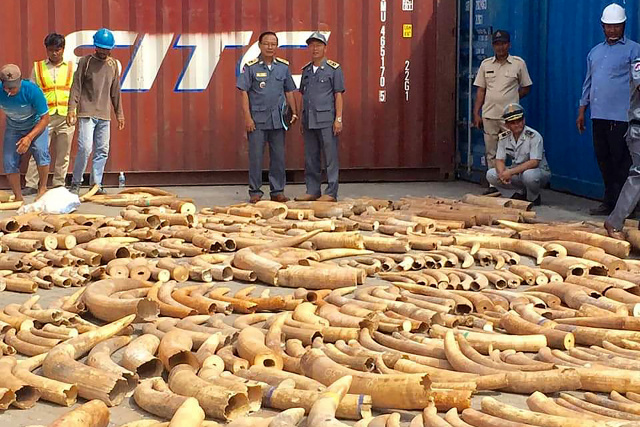 (AFP) - Amid growing calls for an outright ban, the European Union has come under increasing pressure to help protect African elephants by ending the trade of ivory within its borders.

Poaching has decimated the world elephant population, which slumped in Africa from several million at the turn of the 19th century to around 400,000 in 2015.

According to conservation group WWF, as much as 60 percent of all elephant deaths can be blamed on poaching.

The David Shepherd Wildlife Foundation, which campaigns against the ivory trade, says that between 2007 and 2014, 144,000 elephants were killed across Africa -- the equivalent of one death every 15 minutes.

The international trade of ivory was officially banned in 1989.

But several other markets, including the EU and Japan, have no such internal bans.

Ivory and the plight of African elephants is a hot-button issue this week at a meeting in Geneva of parties to the Convention on International Trade in Endangered Species (CITES), which regulates trade in more than 35,000 species of plants and animals.

On Wednesday, countries agreed to demand more scrutiny of the ivory markets that remain open, but stopped short of heeding a call by mainly African countries to order the immediate closure of all domestic ivory markets.

The conference did however order the EU as well as Japan and other countries that still permit the trade to report back within a year on what measures they are taking to ensure that their ivory markets are not contributing to elephant poaching and illegal trafficking.

Conservationists welcomed the increased scrutiny, but warned it was not enough.

"We are moving in the right direction, but we don't have time to waste," Sarah Morrison, with campaign group Avaaz, told AFP.

"We urgently need to close all domestic markets and make sure we put the lives of elephants first."

Philip Muruthi of the African Wildlife Foundation (AWF) agreed, stressing that "there isn't enough ivory in the world to satisfy current demand."

"As long as a market exists for ivory, you can be sure that elephants are being killed to sustain it."

The European Union currently has, at least in theory, stringent rules on ivory sales within its borders.

It's illegal to export elephant tusks out of the EU, and only objects dated before 1947 can be bought without paperwork -- any ivory made after that date requires a certificate to purchase.

But last year, a joint study between the University of Oxford and Avaaz showed that as much as a fifth of ivory objects came from elephants killed after the global trade ban in 1989.

Campaigners say it is still too easy to trade illegal ivory within and out of the EU.

A coalition of 17 NGOs calling for a Europe-wide ban said that illegal ivory was being "laundered by exploiting loopholes in EU law".

Ivory sold as "antique" currently requires no proof of authenticity or origin within Europe, it said.

France, Belgium, Britain and the Netherlands have all adopted or are set to adopt stricter measures against the illegal trade.

"The African elephant will be protected because you will no longer be able to buy ivory and poaching will cease," he said.

Conservationists insist it is still easy to find ivory sculptures for sale online with no proof of their provenance.

The WWF said the world needed "a better understanding of what constitutes an effective market closure" in order to seal off loopholes.

During Wednesday's debate, the EU hinted new regulations were soon to be introduced across the bloc.

Matthew Collis, policy chief at the International Fund for Animal Welfare (IFAW), welcomed that, insisting though that any changes to the EU rules should "shut down ivory markets in the EU with all but extremely limited exemptions, in line with actions taken by other nations like China, the US and the UK."