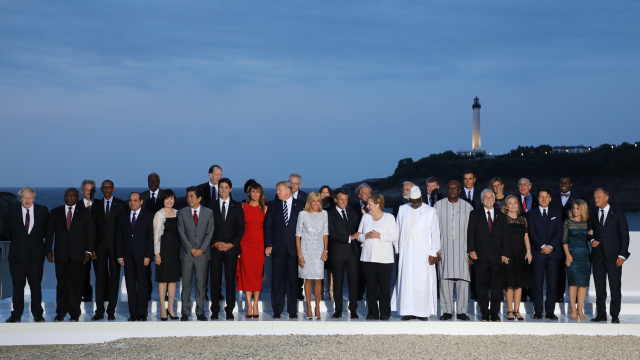 (AFP) - French President Emmanuel Macron gambled by inviting Iran's foreign minister Mohammad Javad Zarif to the G7 summit on Sunday in a high-stakes diplomatic flourish that he hopes will help de-escalate rising tensions in the Gulf.

Macron has over the last months sought to play the prime mediation role between the West and Iran after US President Donald Trump last year walked out of the 2015 nuclear deal and Iran ramped up its atomic activities.

The French president had received Zarif only Friday at the Elysee Palace in Paris for rare talks in a Western capital.

But even if there was no spectacular direct encounter with Trump in Biarritz, Zarif's surprise arrival was a prime example of Macron's penchant for high-visibility diplomacy and headline-catching gestures.

"It's not a huge risk" for Macron, Robert Malley, head of the International Crisis Group, a think-tank, told AFP.

"What does he have to lose? On the plus side, if he succeeds (in lowering tensions), it's a tremendous win for him. And if he doesn't, people won't blame him."

"I suspect that they (the French) are as cautious as I am," he added.

Macron's past attempts to mediate in the Libyan civil war have failed to produce progress, while he has also struggled to make headway in seeking an end to fighting in Syria.

At stake with Iran is the nuclear deal which many analysts deemed to be dead in the water after Trump walked out of what one of the signature foreign policy achievements of his predecessor Barack Obama.

The 2015 deal was seen as a landmark moment in ties between United States and Iran, after relations were severed in the wake of the 1979 Islamic revolution that ousted the pro-West Shah.

Macron's invitation to Zarif risked bringing him into direct conflict with Trump, with whom he has over the last two years sought, with limited success, to cultivate as an ally.

But a French official stressed that the decision to invite Zarif had been taken "in agreement with the United States, in perfect harmony".

The French leader wants Iran to return to fully respecting the nuclear deal after Tehran earlier this year ramped up its atomic activities, complaining that the US pullout meant it was not getting its side of the bargain.

The Islamic republic was meant to benefit from major new investments and trade.

Paris knows Iran, whose economy is staggering under international sanctions, wants something in return if it is to return to the negotiating table.

French diplomats have raised the idea of the US putting waivers on sanctions affecting Iranian oil exports and allowing Tehran to reap cash benefits from one of its greatest resources.

A French official described the talks as positive and Zarif posted a picture showing the delegations cheerfully clustered around a table while warning the "road ahead is difficult, but worth trying".

He also met British and German officials but not the Americans.

But no one had predicted the sight of a plane with the Iranian flag and insignia of the Islamic Republic landing at Biarritz airport, whose appearance sparked a frenzy of excitement among plane spotters.

Asked about the visit, German Chancellor Angela Merkel stressed "it was a parallel event at the same place, but not a G7 initiative".

In a frantic week of travel, Zarif had held his Paris talks with Macron on Friday after a tour of Scandinavia and then flew back to Iran before heading to Biarritz. He now is expected to travel to China.

In an interview with AFP on Friday in Paris following his talks with Macron, Zarif had given no indication that a trip to the G7 was planned.

But he applauded suggestions made by Macron to break the deadlock on the nuclear standoff, "saying they are moving in the right direction, although we are not definitely there yet."

"We are searching for ways Europe can in fact implement its commitments so that we can reverse the steps we have taken," he said.

General » Be a reporter: Write and send your article » Subscribe for news alert
Tags: G7, summit, France, US, Iran, diplomacy