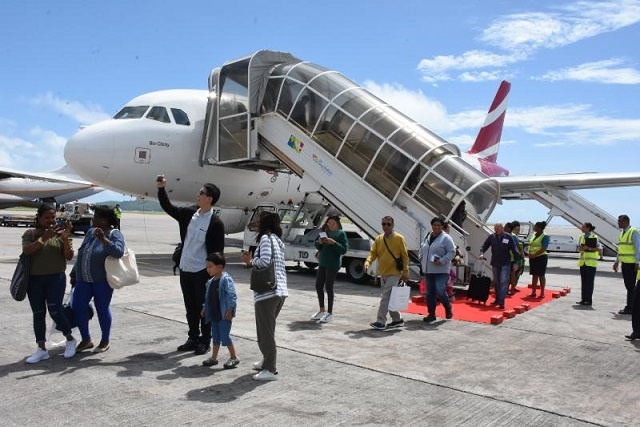 Kwenin explained that the movement of people within the Indian Ocean revolves mostly around tourism and labour migration. (Louis Toussaint)

(Seychelles News Agency) - Issues surrounding migration in the region -- including maritime security, climate change, human trafficking and health risks -- are being discussed in Seychelles this week by members of the Indian Ocean Commission (IOC).

The discussions are part of a three-day consultative meeting on the establishment of a Migration Dialogue for the Indian Ocean Commission Countries (MiDIOCC).

The August 26-28 meeting is being hosted by Seychelles, which holds the presidency for the Indian Ocean Commission. The International Organisation for Migration (IOM) is partnering with IOC to organise and conduct this meeting.

Established in 1951, IOM is the leading inter-governmental organisation in the field of migration and works closely with governmental, intergovernmental and non-governmental partners.

The Principal Secretary for Immigration, Alain Volcere, said that “the two organisations have partnered to start this discussion and we are hoping that it won’t be the last, that it will be an exercise that will continue under a better structure in the future.”

“The forum is one that allows us to express and exchange ideas, and explore opportunities in regards to the challenges out there. More emphasis must be placed on how to maximise the benefits of migration instead of only seeing it as something negative, which needs to be minimised,” said Volcere.

He added that there are about 260 million migrants in the world and this region has not been left unaffected. It is important that islands of the Indian Ocean start having such a dialogue to see how to manage these issues better.

Such dialogues already exist for countries in the northern, southern, western, eastern and central regions of Africa.

“Countries in the Indian Ocean do not have land neighbours like there is on mainland Africa and these are countries boarded by a vast ocean. It is important that you look at your own specific realities and address them and, in this meeting, we are hopeful that the member states will discuss some of the priority issues,” said Charles Kwenin, the International Organisation Migration’s regional director for Southern Africa.

Kwenin explained that the movement of people within the Indian Ocean revolves mostly around tourism and labour migration, especially in Seychelles and Mauritius.

“Especially in Mauritius and Seychelles, you have a lot more ageing population because they are high-income countries so they have a higher life expectancy as compared to other countries,” said Kwenin.

He added that the visa regime of a country is also a factor that affects migration.

In his opening address, Vice President Vincent Meriton said, "Seychelles hosts about 21,000 foreign workers. Most of them are employed in the construction, tourism and fishing sectors. To date, we are among the countries, if not the only one in the world, where the visa exemption is open to all. This means that migration and the free movement of people are at the heart of Seychelles' economy and life."

Seychelles, an archipelago in the western Indian Ocean, was the top-performing African country on visa openness in 2018.