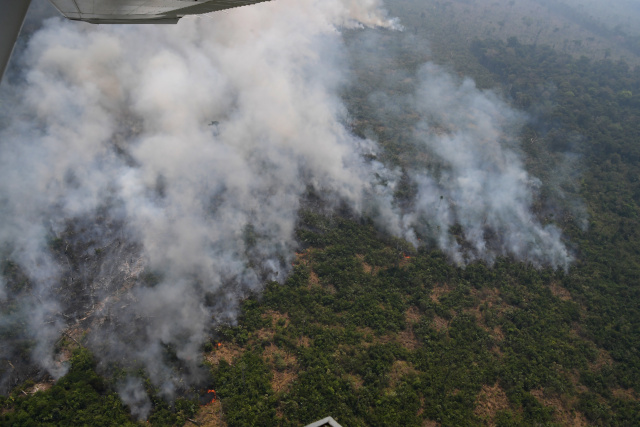 Aerial picture showing smoke from a two-kilometre-long stretch of fire billowing from the Amazon rainforest about 65 km from Porto Velho, in the state of Rondonia, in northern Brazil, on August 23, 2019. Bolsonaro said Friday he is considering deploying the army to help combat fires raging in the Amazon rainforest, after news about the fires have sparked protests around the world. The latest official figures show 76,720 forest fires were recorded in Brazil so far this year -- the highest number for any year since 2013. More than half are in the Amazon. (Carl DE SOUZA / AFP)

(AFP) - Brazil on Monday rejected aid from G7 countries to fight wildfires in the Amazon, with a top official telling French President Emmanuel Macron to take care of "his home and his colonies."

"We appreciate (the offer), but maybe those resources are more relevant to reforest Europe," Onyx Lorenzoni, chief of staff to President Jair Bolsonaro, told the G1 news website.

Lorenzoni was referring to a $20 million pledge made at the G7 summit in France to fight the rainforest blaze.

"Macron cannot even avoid a foreseeable fire in a church that is a world heritage site. What does he intend to teach our country?" He continued, referring to the fire in April that devastated the Notre-Dame cathedral.

The presidency later confirmed the comments to AFP.

Brazilian environment Minister Ricardo Salles had earlier told reporters they had welcomed the G7 funding to fight the fires that have swept across 950,000 hectares (2.3 million acres) and prompted the deployment of the army.

But after a meeting between Bolsonaro and his ministers, the Brazilian government changed course.

"Brazil is a democratic, free nation that never had colonialist and imperialist practices, as perhaps is the objective of the Frenchman Macron," Lorenzoni said.

Tensions have risen between France and Brazil after Macron tweeted that the fires burning in the Amazon basin amounted to an international crisis and should be discussed as a top priority at the G7 summit.

Bolsonaro reacted by blasting Macron for having a "colonialist mentality."