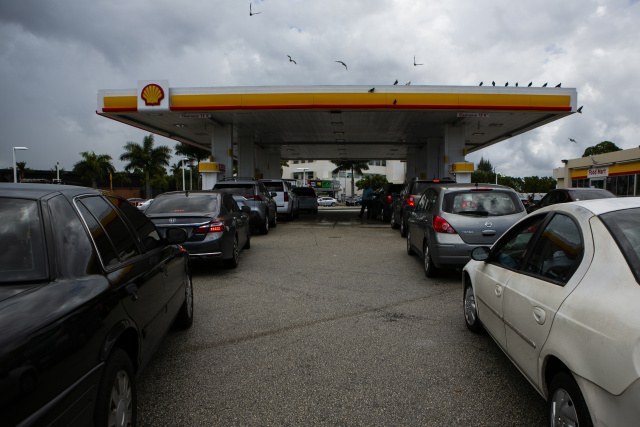 People line up to fill up their car with gas at a Shell station in West Miami on August 30, 2019. Dorian was on a collision course with Florida on Friday as residents stocked up on food and water and battened down their homes to ride out the storm and others prepared to evacuate. Weather forecasters said Dorian, currently upgraded to a Category 3 hurricane, could strengthen into a powerful Category 4 storm before it makes landfall but there was a great amount of uncertainty about where it would hit. Dorian is forecast to make landfall September 2. (Eva Marie UZCATEGUI / AFP)

(AFP) - Hurricane Dorian strengthened into an "extremely dangerous" storm on Friday as it bore down on the Bahamas and the east coast of the US state of Florida.

Bahamas Prime Minister Hubert Minnis urged residents of the Atlantic Ocean archipelago in the path of the "very powerful and potentially life-threatening hurricane" to seek safety.

The Miami-based National Hurricane Center (NHC) said Dorian, which is expected to make landfall in the Bahamas on Sunday and in Florida late Monday or Tuesday, "has strengthened to an extremely dangerous Category 4 hurricane" on a five-level scale.

The storm has winds near 140 miles per hour (220 kilometers per hour), according to the NHC.

"A prolonged period of life-threatening storm surge and devastating hurricane-force winds are likely in portions of the northwestern Bahamas, where a hurricane warning is in effect," the NHC said.

Minnis, the Bahamas prime minister, told a press conference that the storm was life-threatening.

"Those who refuse to evacuate place themselves in very great danger... Do not put your life and those of your loved ones at unnecessary risk.

"Do not be foolish and try to brave out this hurricane," Minnis said. "The price you may pay for not evacuating is your life."

With the path of the storm still uncertain, coastal Florida residents were not under evacuation orders yet but stocked up on food, water and other supplies and made preparations to flee their homes.

Florida Governor Ron DeSantis issued a statewide declaration of emergency and urged its millions of residents to prepare for what he said could be a "major event."

"We're anticipating a massive amount of flooding," DeSantis said. "We urge all Floridians to have seven days' worth of food, medicine, and water."

"If you're in an evacuation zone and you're ordered to evacuate, please do so," DeSantis said.

The Florida National Guard said about 2,000 service members had been mobilized so far and another 2,000 would be on Saturday.

President Donald Trump, whose Mar-a-Lago golf club is located in Palm Beach in Florida, said Dorian was "looking like it could be an absolute monster" and canceled a trip to Poland to stay behind and focus on preparations for the storm.

"All indications are it's going to hit very hard," Trump said in a video.

"Some people said bigger or at least as big as Andrew," a Category 5 storm that left 65 people dead in 1992, he said.

Georgia -- another southeastern state that could be in the storm's path -- has declared a state of emergency for 12 counties.

Governor Brian Kemp said the hurricane "has the potential to produce catastrophic impacts to citizens" throughout the southeast coastal region of the United States.

Trump warned that Georgia "is very much in (the hurricane's) path also. Georgia could be very much affected."

A number of schools announced that classes would be canceled until at least Tuesday.

Orlando International Airport said it would halt commercial flights at 2:00 am (0600 GMT) on Monday "out of an abundance of caution." Orlando is the main airport for nearby Disney World.

NASA is also close by and the US space agency said it was moving an enormous mobile rocket launcher from a launch pad into a vehicle assembly building to protect it from the storm.

A Rolling Stones concert in Miami originally scheduled for Saturday night was moved up by a day due to the weather forecast, the band said on its Twitter account.

General » Be a reporter: Write and send your article » Subscribe for news alert
Tags: US, weather, Hurricane