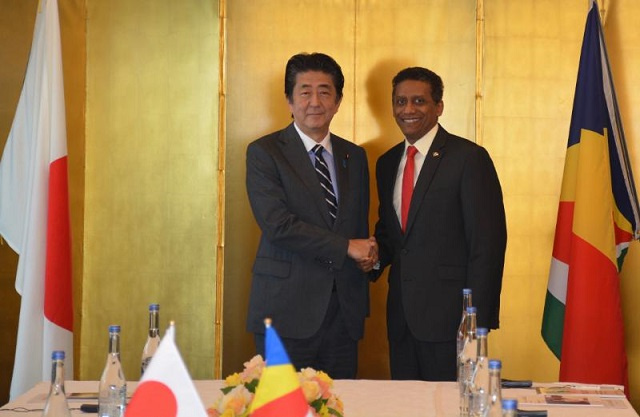 In thanking the Japanese Prime Minister, Faure said, “To complement this and to reinforce our long term cooperation, we also express our sincere appreciation to your government for accepting to support us with specialised training and technical capacity building in anti-narcotics policing.”

He added that the support will help “to further strengthen our capacity in maritime security, an area that will greatly benefit the people of Seychelles in our fight against drug trafficking and boost our maritime security and safety capabilities.”

The Japan-Seychelles maritime security grant will include the building of required infrastructures, re-construction of the Seychelles Marine Police and Anti-Narcotics Bureau headquarters, purchase of specialised marine unit operation equipment as well as high-speed patrol boats.

Discussions between the two leaders also centred on past areas of cooperation between Japan and Seychelles, an archipelago in the western Indian Ocean.

“Since the establishment of diplomatic relations, our two countries have developed strong bonds of friendship and have enhanced collaboration at both bilateral and multilateral levels," said Faure

He added that “Seychelles is very grateful for all the past support given by Japan in fields such as environment, disaster risk management, education and fisheries.”

On his part, the Prime Minister of Japan reiterated the Japanese Government’s commitment towards deepening collaboration with Seychelles and raised the possibility of strengthening and diversifying partnerships in new areas such as tourism.

The two leaders also discussed the possibility of attracting Japanese companies in oil and gas exploration and exploitation in Seychelles.

President Faure also thanked Prime Minister Abe for the establishment of the Japanese Embassy in Seychelles and presented his congratulations to Japan for winning the bid to host Expo 2025. Seychelles and Japan established diplomatic relations in 1976.

The Yokohama Declaration 2019 was adopted at the final session and the Yokohama Plan of Actions for 2019 was endorsed. The plan outlines the way forward and various actions for implementation.