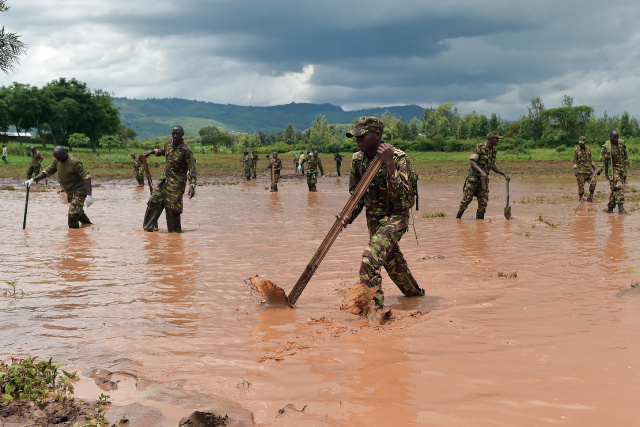 Kenya Defence Force (KDF) soldiers patrol and inspect through mud and debris on May 11, 2018 in search of bodies of victims after a dam burst its banks, sending muddy waters raging through homes and killing at least 45 people in Subukia, Nakuru county. Kenyan authorities said Monday they have recovered the bodies of six of seven members of a tour group who were killed in a flash flood at the Hell's Gate national park. (TONY KARUMBA / AFP)

(AFP) - Kenyan authorities said Monday they have recovered the bodies of six of seven members of a tour group who were killed in a flash flood at the Hell's Gate national park.

"Six bodies of the flash flood victims have been recovered, leaving one tourist missing," the Kenya Wildlife Service (KWS) said on Twitter.

The KWS manages the park, the location of the 2003 film "Tomb Raider: The Cradle of Life".

It said the search and rescue operation was continuing and the authorities have sought to contact the next of kin.

Six tourists - five Kenyans and a foreigner -- and their local guide were swept away in the flash flood as they were visiting the park on Sunday, part of a group of 13.

Two survivors from the group alerted park rangers who sent out a search party.

The deep gorges of the Hell's Gate park are often lashed by heavy rains. In 2012, seven young Kenyans drowned at the same spot in the Ol Jorowa gorge in the south of the park.

The tour guides have "been trained to detect storm water flowing downstream towards the gorge," the KWS said.

"Every group is usually accompanied by experienced guides who are able to alert tourists of impending emergencies and direct them to exit points.

"Since the last similar tragedy in 2012, we have created clearly marked emergency exists along the whole gorge as escape routes in case of danger like the flash floods."

It said on Sunday that the gorges were closed to the public as the rains are continuing.

Hell's Gate, named by 19th-century explorers, is around 100 kilometres (60 miles) northwest of the Kenyan capital Nairobi and just south of Lake Naivasha.

Its spectacular scenery inspired the Disney animation "The Lion King".

The park, established in 1984, is also home to three geothermal stations.