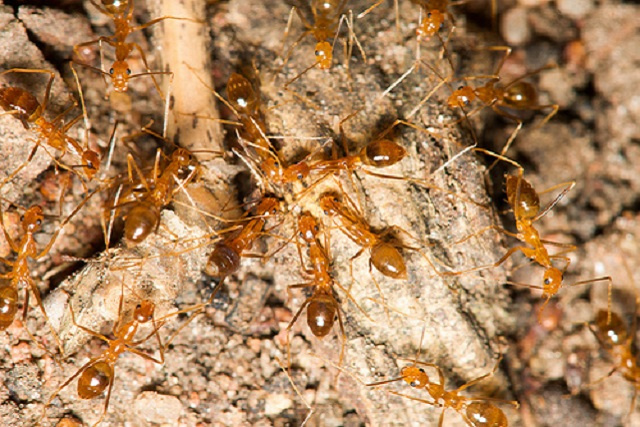 Recorded for the first time in Seychelles on Mahe in 1962, the species has rapidly spread to neighbouring islands. (Seychelles Islands Foundation)

(Seychelles News Agency) - A task force has been set up to reduce the number of yellow crazy ants threatening the unique ecosystem of the Vallee de Mai, a UNESCO site located on Praslin, Seychelles’ second-biggest island.

The team of 18 staff from the Seychelles Islands Foundation (SIF) has received training on how to deploy a new type of chemical bait across the forest to control the invasive ants and reduce the impact to native wildlife.

‘AntOff’ -- a pesticide contained in granular pellets specially designed to combat ants -- is being spread all over Vallee de Mai. The pesticide remains active for around six hours before it naturally breaks down.

SIF’s chief executive, Frauke Fleischer-Dogley, said in a press conference on Friday that "because Vallee de Mai is a water catchment area, we are not using the chemical along the water streams so as to ensure that it does not leak into the water system.”

“Work has started on Monday, as we were waiting for the right weather conditions. There needs to be no rain, which will prevent the chemicals from leaking into the water,” she said.

Since work started, the SIF team has been able to cover the whole of Vallee de Mai and have already observed the ants taking up the chemical.

“We have already seen huge amounts of dead ants on the trails and this is very promising,” said Fleischer-Dogley.

Considered as one of the top 100 worst invasive species in the Global Invasive Species Database, yellow crazy ants were first recorded in Seychelles on Mahe in 1962. The species rapidly spread to neighbouring islands.

The ants attack wildlife with their formic acid spray, blinding much larger animals such as geckos and skinks, making the yellow crazy ants a threat to other species and to the fragile palm forest ecosystem.

The presence of the ants in the Vallee de Mai is of great concern as it is home to the endemic coco de mer – the world’s biggest nut. For the coco de mer to thrive, it needs a functioning ecosystem process where there are adequate pollination and a nutrient cycle.

“We are extremely concerned with the yellow crazy ants' attack on the pollinators. With no pollination, it would mean that there would be no food and no new coco de mer growing and therefore the cycle of generations will not happen,” said Fleischer-Dogley.

Declared as an emergency situation, the yellow crazy ant control project is being funded by UNESCO at a cost of $96,000, obtained as part of the organisation’s emergency fund. The Vallee de Mai is one of the two UNESCO World Heritage sites of Seychelles, an archipelago in the western Indian Ocean.

SIF has previously attempted to control the numbers of yellow crazy ants in the forest using boric acid bait systems which attract the ants to a covered bait station that only these ants can access. These attempts have been unsuccessful in reducing the abundance or distribution of the ants, which now extends across the entire Vallee de Mai. Declines in several endemic animal species have already been observed.