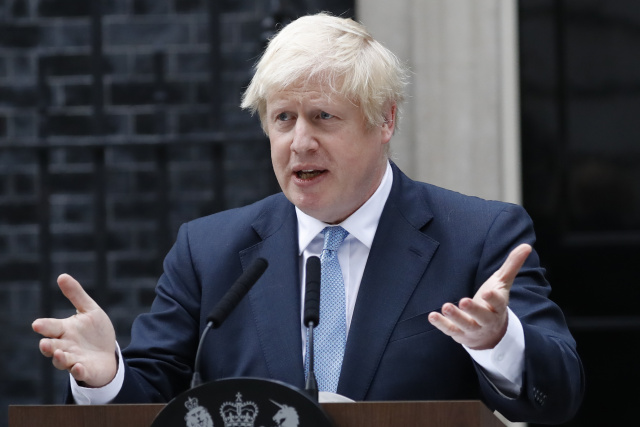 Britain's Prime Minister Boris Johnson delivers a statement outside 10 Downing Street in central London on September 2, 2019. British Prime Minister Boris Johnson on Monday said the chances of a Brexit deal with Brussels were "rising" but ruled out any delay to the October 31 deadline for Britain to leave the European Union if no agreement is struck. Johnson also said he did not want a general election and urged rebel Conservative MPs not to undermine his negotiations with Brussels by voting with the opposition on a draft law that might force him to postpone Brexit. (Tolga AKMEN / AFP)

(AFP) - British Prime Minister Boris Johnson faces a rebellion by his own lawmakers on Tuesday over his Brexit strategy, despite warning he would respond to any defeat by calling an early election.

Members of Johnson's own Conservative party are preparing to join opposition lawmakers to try to force a delay to Britain's exit from the European Union if he cannot secure a divorce deal with Brussels in the next few weeks.

If they win an initial vote on Tuesday evening, however, Johnson has threatened to call a snap election for October 14 in a bid to strengthen his hand, a senior government official said.

Johnson took office in July promising to deliver on the 2016 referendum vote for Brexit, and take Britain out of the EU on October 31 no matter what.

He says he wants an amicable divorce with Brussels but has rejected the exit terms on offer and says he is willing to walk away without a deal.

However, many MPs fear a "no deal" exit will cause huge economic disruption and a cross-party coalition will on Tuesday begin trying to legislate against this scenario.

They will seek first to take control of the parliamentary agenda to make time on Wednesday to debate a bill that could see Brexit delayed to January 31, 2020, if no deal is agreed.

In a defiant statement in Downing Street on Monday evening, Johnson refused to change course.

He said the chances of striking a deal with Brussels "have been rising" ahead of a summit of EU leaders on October 17 and 18.

But he attributed this to his tough stance, saying a vote by MPs to delay Brexit would "chop the legs out from under the UK position".

"I want everybody to know -- there are no circumstances in which I will ask Brussels to delay," he said.

More than three years have passed since Britons voted by 52 percent to leave the EU, a period marked by huge political upheaval, economic uncertainty and deep divisions in parliament and across the country.

Former prime minister Theresa May agreed a deal covering Britain's financial contributions, the rights of EU expatriates and the Irish border, but it was rejected by parliament three times.

Johnson has repeatedly called on the EU to renegotiate but it has so far refused, accusing London of offering no alternative proposals.

Both sides have stepped up preparations for a disorderly divorce, but MPs, who return from their summer holiday on Tuesday, are making one last attempt to stop it.

They do not have much time, as Johnson has controversially decided to suspend parliament next week for more than a month -- a decision that will be challenged in court in Edinburgh on Tuesday.

"This week could be our last chance," Labour leader Jeremy Corbyn said in a speech on Monday.

The rebels' proposed law states that if MPs have not approved an EU deal or endorsed a "no deal" scenario by October 19 -- the day after the EU summit -- then Johnson must seek a delay to Brexit.

If it fails, Corbyn said Labour could back a vote of no-confidence in Johnson's government, which could lead to a general election.

Johnson made his own threat to call a poll at an emergency cabinet meeting on Monday evening, the government official said, expressing confidence that the necessary two-thirds of MPs would back it.

But in his public statement, Johnson insisted this was something "I don't want and you don't want".

Opinion polls suggest Johnson's decisive action on Brexit is popular with voters, and an election could help him increase his wafer-thin parliamentary majority.

However, it could also be a huge risk, particularly before Brexit is delivered.

The 2016 referendum vote shook up the political landscape, and the Conservatives are now challenged not just by Labour but also the eurosceptic Brexit Party and the pro-European Liberal Democrats.