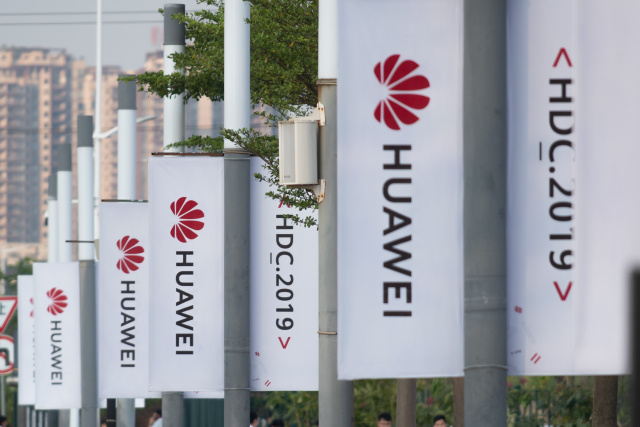 Banners with the Huawei logo are seen outside the venue where the telecom giant unveiled its new HarmonyOS operating system in Dongguan, Guangdong province on August 9, 2019. Chinese telecom giant Huawei unveiled its own operating system on August 9, as it faces the threat of losing access to Android systems amid escalating US-China trade tensions. (FRED DUFOUR / AFP)

(AFP) - Beleaguered Chinese telecom giant Huawei on Tuesday denied accusations reported in the Wall Street Journal that it stole technology from a Portuguese inventor, accusing him of "taking advantage of the current geopolitical situation."

The US Department of Justice is looking into the claim, potentially adding to existing criminal cases against Huawei, the WSJ reported last week.

Huawei -- considered the world leader in superfast 5G equipment and the world's number two smartphone producer -- was in May swept into a deepening trade war between Beijing and Washington, which has seen punitive tariffs slapped on hundreds of billions of dollars of two-way trade.

The latest controversy involves Portuguese inventor Rui Pedro Oliveira who claims Huawei met him and then essentially ripped off one of his designs in order to produce the Huawei EnVizion 360 panoramic camera.

"These allegations are false," Huawei said in a statement in which it "categorically rejects Mr. Oliveira's claims of patent infringement".

"For the past several months, the US government has been leveraging its political and diplomatic influence to lobby other governments to ban Huawei equipment. Furthermore, it has been using every tool at its disposal – including both judicial and administrative powers, as well as a host of other unscrupulous means – to disrupt the normal business operations of Huawei and its partners," the Chinese company said.

It said "Oliveira proceeded to feed a false narrative to the media in an attempt to tarnish Huawei's reputation. He made further efforts to exert pressure on Huawei through senior government officials, trying to make the company cede to his demands and hand over large sums of money."

Washington fears that Huawei will provide Beijing with a way to spy on communications from the countries that use its products and services.

Huawei admitted meeting with Oliveira in 2014 but insisted that its EnVizion 360 camera was "independently designed and developed by Huawei’s employees having no access to Mr. Oliveira’s information".

Last month the US Commerce Department effectively suspended for a second time tough rules stopping the sale of components and services to the Chinese telecoms titan and a prohibition on buying equipment from it.

However, it also said it would add 46 more companies to its list of Huawei subsidiaries and affiliates that would be covered by the ban if it is implemented in full -- taking the total on the list to more than 100.

In December Canada arrested Huawei executive Meng Wanzhou on a US warrant.

General » Be a reporter: Write and send your article » Subscribe for news alert
Tags: US, China, Huawei, technology, investigation