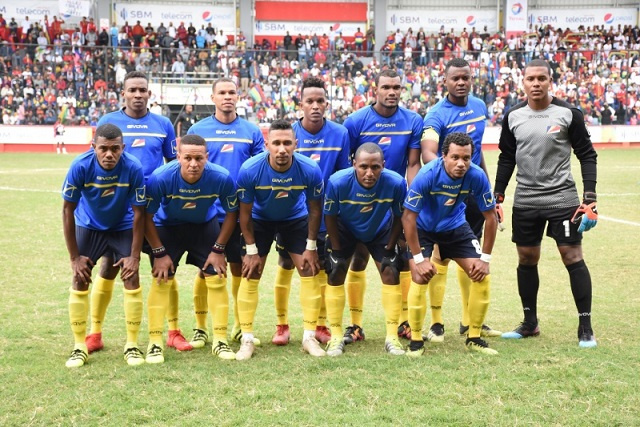 The Seychelles' team which took part in the Indian Ocean Island Games in Mauritius in July. (Seychelles Nation)

The Seychelles’ side will face Rwanda on home ground on Thursday, September 5 at 4 p.m. Stad Linite in the first leg. The second leg will be played in Rwanda on September 10.

The Seychelles Pirates already has as coach Dutch Jan Mak, who was chosen by the local Football Federation on a short contract until October 31. Coach Mak takes over from Gavin Jeanne, whose contract ended on August 31.

The announcement was made by the Secretary-General of the Federation, George Bibi, in a press conference on Friday to provide details on the preparation of the national team.

“The federation decided after the Indian Ocean Island Games to restructure the management of the national team. The fact that we had little time to recruit permanent personnel, the Federation decided to select members on a temporary basis for the four upcoming matches,” said Bibi.

Coach Mak will be leading the team from Seychelles, a group of 115 islands in the western Indian Ocean, in the home and away matches for the World Cup 2022 and for the 2021 Africa Cup of Nations between 7 to 15 October.

“For the time being, we agreed that Jan Mak will be with the team for two months. With only a few days before Seychelles faces Rwanda, former coach Jeanne has already provided a pre-selected list of players for Mak. Training started on Monday,” said the Secretary-General.

Coach Mak said on Wednesday that although he agreed to take responsibility for the preparation of the team, the "circumstances under which I must prepare those are more difficult than what I expected. You always have in the national team, the strongest possible team. For several reasons which I don't want to discuss now we don't have it."

Many players who were part of the team have backed out for several reasons including injury and therefore new players who are available have been selected.

The Seychelles' team which made its debut in the World Cup qualifiers in April 2000 has so far not made it to the final spot. The Pirates lost to Namibia 4-1 in their first participation. Seychelles exited the World Cup 2018 after losing 3-0 against Burundi.

For the World Cup 2022, the Confederation of African Football (CAF), will use the same format as the 2014 edition. Fifty-two teams from Africa will compete in a 12 home and away basis with the winners joining the other teams in the second round matches. Africa has five out of the 32 spots for the World Cup final in Qatar in 2022.

In the 2021 Africa Cup of Nations, the Seychelles Pirates' first match will be a two leagued encounter with South Sudan between October 7 and 9 and the return match a week later.

The 2021 Africa Cup of Nations (AFCON 2021) is a biennial international men's football championship of Africa organised by the Confederation of African Football (CAF). The tournament is scheduled to be hosted by Cameroon. Seychelles has been drawn in group B with Burkina Faso, Uganda, Malawi and South Sudan.