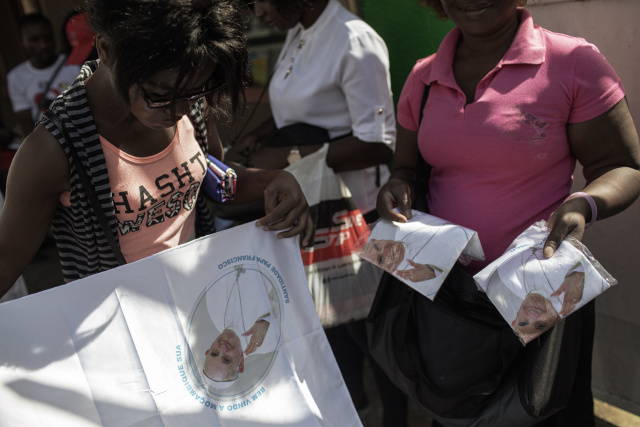 People sell Pope Francis merchandise outside the Pauline Edition, a Catholic publisher house, in Maputo, Mozambique, on September 3, 2019. Pope Francis will visit Mozambique from the 4th of September to the 6th. (GIANLUIGI GUERCIA / AFP)

(AFP) - Pope Francis arrives in Mozambique on Wednesday at the start of a three-nation tour of Indian Ocean African countries hard hit by poverty, conflict and natural disaster.

He is expected to be welcomed by tens of thousands during his visit, which will culminate with a mass on Friday at the giant Zimpeto stadium in the seaside capital Maputo.

Pope John Paul II was the last pontiff to visit Mozambique in 1988.

In a video message recorded ahead of the trip, Pope Francis stressed the need for "fraternal reconciliation in Mozambique and throughout Africa, which is the only hope for a solid and lasting peace".

The pope is expected to address the country's fragile peace process, the devastation caused by two back-to-back cyclones early this year, and the upcoming general election.

The three-day tour comes a month after the Mozambique government signed a historic peace treaty with the former rebel group Renamo, which is now the main opposition party.

The pope may also address the issue of extremism in northern Mozambique where jihadist attacks have claimed more than 300 lives over two years.

The visit will be a good omen for a country in "crisis," said Jaime Taimo, a 21-year-old student.

"With his arrival I see things are going to change... in the sense that we could live peacefully again since we've been living in constant conflict," he said.

"His arrival can bring good things."

The pope will also visit the large Indian Ocean island of Madagascar and its much smaller neighbour Mauritius -- both situated off the eastern coast of Africa.

His choice of some of the world's poorest nations is seen by commentators as an act of solidarity from a cleric who was a frequent presence in the shantytowns of Argentina.

Known as the "pope of the poor" the pontiff will only have time to visit Maputo while in Mozambique, much to the disappointment of those in the central city of Beira where Cyclone Idai killed at least 600 people and left hundreds of thousands homeless in March.

The pope, in his video message, anticipated the disappointment.

"Although I am unable to go beyond the capital, my heart reaches out to all of you, with a special place for those of you who live in difficult situations," he said, adding: "You are all in my prayers."

The capital has been spruced up for the visit, with the government spending 300,000 euros ($330,000) for the trip, according to Foreign Minister Jose Pacheco, including repairs to Maputo's cathedral and city roads.

Many locals appear happy to splurge on pope-branded regalia.

Thirty-nine-year-old housekeeper Fatima dos Santos, made a 1,600-kilometre (1,000-mile) trip from the central city of Quelimane for the historic opportunity to see the pontiff.

She showed off a cloth known as a capulana, which she will sport at the Friday mass.

"I am going to Zimpeto to meet Pope Francis who is our greatest saviour," dos Santos told AFP tying the cloth around her waist.

"This is the second time that I welcome a pope to Mozambique," said Dos Santos who was a child when the last pope visited.