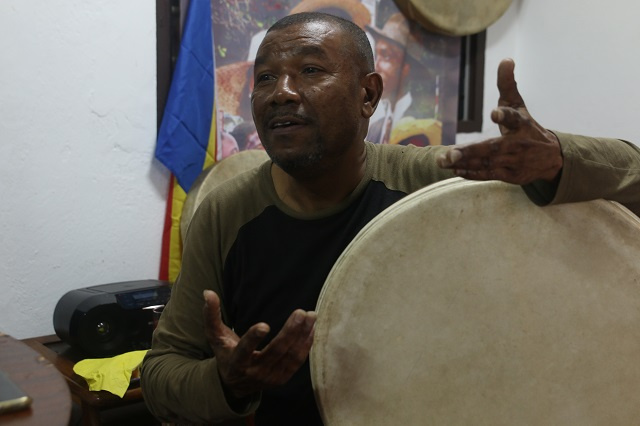 Victor said, "I know that I have a tough task ahead but during my mandate, I will give it the best of my abilities and pave the way, so after my time ends someone else can continue with what has started." (Joe Laurence, Seychelles News Agency)

A proper evaluation of Seychellois culture is something that the newly appointed Honorary Cultural Ambassador of the island nation said is a priority for him.
Last month, the President of Seychelles, Danny Faure, appointed Patrick Victor, the local musical icon, as Honorary Cultural Ambassador to promote the Seychellois culture locally, regionally and internationally. Victor was commended for the many contributions he has made to Seychellois music and culture.
SNA met with the Victor at his very first official function as ambassador at the launch of the National Arts Award and through this Q&A brings you Victor’s sentiments and his future plans.
SNA: Ambassador Victor, can you share your sentiments after your appointment?

PV: I am honoured as I am the first Seychellois to be appointed in this position before there were cultural ambassadors but they were all foreigners. Besides I am also someone who basically lives and breathes Seychelles’ culture, music, and traditions, something I have been doing for most of my life. And this is an encouragement that the country has bestowed upon me as an artist and many others who are leading the cultural combat to develop our creative industry. I take the time to salute my brothers and sisters for their courage and who on a voluntary basis give their time and support to the island's culture, without giving up even in times when we are misunderstood.

SNA: What would you say is something that is pertinent and that is needed to be attended to as a priority?

PV: I think something that is long overdue is a proper evaluation of Seychelles’ cultural heritage.  It’s true that this sector is a challenging one but I do feel that there is a lot of positivity and development in the culture sector. On this note, I want to congratulate young people who have joined the creative industry. But culturally as a nation, what do we have? Is Anse Boileau as a district still strong on the traditional dance, Kamtole? Is Port Glaud still reign as a moutya community? Are the Diguois still leading with traditional songs such as romances?

This is was needs to be established and also see how these are transferred to our younger generation. Most of the time we say that our culture is being eroded but in such instance, what do we do? That is why I say an evaluation is crucial because it is only then that we will know where to inject support, financially and by other means.

SNA: So what do you think is really needed then and what are you proposing?

PV: Isn’t time that we think outside of the box? For instance, a lot of emphasis is put on Creole during the festival in October. But it is time to do these activities in other instances. Also, why not put some finances in an exhibition and invite big producers from the region and expose them to our visual artists and their works. Why not have a proper music festival: all music. Mind you there is Seychellois music that we have lost and we are not saying anything about it.

Also a few years ago I was hosted by a lady who works for UNESCO and resides in Italy and asked me why are we not bringing the Creole festival outside Seychelles. What about a Creole festival in Venice, Italy, or the United States, wherever but try and go out there, instead of keeping everything here to ourselves. We also need to be inclusive of other music genres that have filtered in, we now have hip hop, raga, and others. Be mindful that these also play a crucial role in cultural development and of the industry as a whole. As a way forward I will be having dialogues with all these groups, to see what is best needed for us.

SNA: There is so much that is needed to be done, but when we talk about the international scene how do you think you will promote Seychelles internationally?

PV: I am passionate about this and there are opportunities out there. You would be surprised at how many Creole communities exist all over the world. Be it Creoles from Mauritius or Haiti or wherever there are Seychellois. Some I am already in contact with and we speak about exchanges, researches amongst others.

It is not only dancing, musical shows but it goes deeper, sharing the creole cuisine, sharing researches and most importantly share experiences and networking. I know that I have a tough task ahead but during my mandate, I will give it the best of my abilities and pave the way, so after my time ends someone else can continue with what has started.