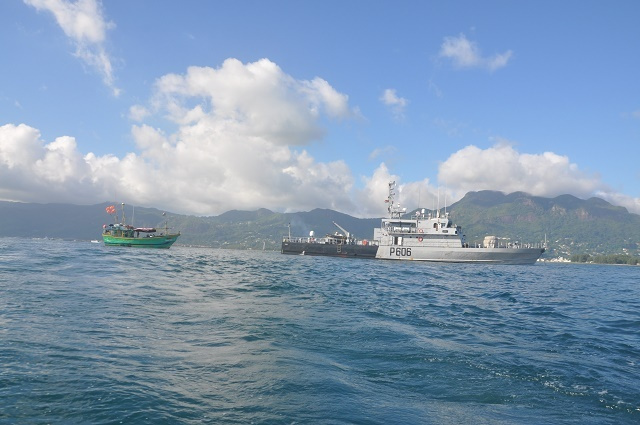 The vessel was intercepted by the Seychelles Coast Guard patrol ship ‘Topaz’ during a routine patrol in February. (Seychelles People's Defence Forces)

(Seychelles News Agency) - A Sri Lankan national who pleaded guilty for fishing illegally in the Seychelles’ waters will be repatriated to his country as a prohibited immigrant as part of the sentence imposed by the Supreme Court.

According to court record obtained on Wednesday, Kostawatta Thamel was caught fishing in the waters of Seychelles on February 28 onboard a Sri Lankan-flagged boat ‘Nuwan Putha 14, IMULAN 0831 KLT with no license or authorisation in violation of the Fisheries Act 2014.

Apart from the repatriation to Sri Lanka, Thamel was ordered to pay a fine of SCR 2000 ($146). His fishing vessel involved in the case including the fishing gears and equipment were also forfeited.

The presiding judge, Ronny Govinden, ordered that the fine of SCR 2000 ($146) be levied from the sale and disposal of the fishing vessel, fishing gears and equipment.

When passing the sentence on August 30, Govinden said, “I take into account the plea in mitigation made in favour of the convicted person in this case, having done so, I find that there are strong mitigating circumstances in his favour. Moreover, I feel that in order not to discriminate, I must keep in line with settle practice of sentencing in relation to cases similar on the facts as the one before this Court.”

In the mitigation submitted, the convict pleaded guilty upon the first opportunity after he had received the valuation report in respect of the value of his vessel. He gave a statement under caution to the Police alluding that he was in Seychelles’ waters accidentally, but when he stopped in Seychelles waters he fished, however, his intention was for him to proceed to international waters.

There were also special personal circumstances in favour of the convict in this case, in that he is a person of 54 years and has three dependents back in his national state Sri Lanka -- his wife and two children. He also suffers from a condition that resembles pneumonia.

The lawyer of the Sri Lankan national, Nichol Gabriel, said they are going to appeal against both the conviction and the sentence of the Court.

There have been several incidents of Sri Lankan-flagged vessels fishing in the Seychelles’ waters since May last year. The Supreme Court sentenced the captain of a Sri Lankan fishing vessel $14,600 (SCR200,000) for illegal fishing in March.