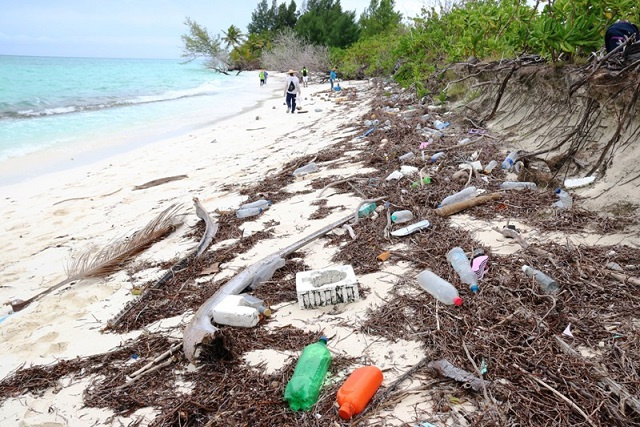 Volunteers in the large-scale cleanup on outer islands organised by the Islands Development Company in May. (Seychelles News Agency)

(Seychelles News Agency) - Identifying the key sources, pathways, hotspots, and impacts of marine litter and microplastics were the aim of a 10-day training in Seychelles to improve the data collection capacity of environmental officers.

“The training was done with the aim of showing how data should be collected in Seychelles on different plastic debris that goes into our ocean. The participants did surveys on the beach and inland, in rivers and marshes to see what kind of waste there are in the country,” Fredrick Kinloch, director of waste management, told journalists Thursday.

The training was done by representatives from Ministry of Environment and the UN Environment Programme (UNEP), in collaboration with the Western Indian Ocean Marine Science Association (WIOMSA), the Nairobi Convention and the Commonwealth Scientific and Industrial Research Organisation (CSIRO).

Carrying out these national source inventories in a country strengthens the evidence base for action and empowering decision-makers to make informed and effective interventions. This is aimed at lessening the impacts on people and the environment.

Held from August 26 to September 4, the training included travel along the coast for data collection. The participants were expected to take forward the knowledge gained during the training into further marine litter monitoring efforts in Seychelles.

The data collected during the activity will provide a baseline of information for better decision in the country. Information from future data collections will be used to formulate the countries potential policies and legislations for waste management.

A participant in the training, Dainise Quatre, who is also a ranger at the Seychelles National Parks Authority (SNPA), told SNA that she learned “simple ways on how to collect data when it comes to plastic pollution and other waste that is disposed into the environment.”

“We also learned on which baseline we will collect data such as inland rivers and coastal. At the moment we are collecting information only from coastal litters but from the training, we have realised that it is not only on the coast, but we need to find areas wherefrom the rubbishes are coming before ending up on the coast,” said Quatre.

She added that “rubbishes are not always being washed in from the ocean to the coast.”

Marine litter and microplastics are a great concern for many countries, as they are affecting marine life, but not limited to it. In a study carried out by the University of Newcastle in Australia is has been found that microplastics -- particles smaller than five millimetres -- are making their way into our food, drinking water and the air. The amount ingested is estimated at approximately 5 grammes of plastic every week, which is the equivalent weight of a credit card.

Seychelles, a group of 115 islands in the western Indian Ocean, is already doing a lot through beach clean-ups on the main islands as well as on the outer islands.

“I think that there are a lot of great initiatives here and interest in collecting data, however, the data is still weak. We do not really have a good idea of the total quantity of plastics. Seychelles is doing a lot but it is a new area but there is no data anywhere that really gives us the full picture,” said Jilian Campbell, the chief statistician from UNEP.

She pointed out that Seychelles can use Australia as a country from which best practices can be adopted as “they have been collecting this sort of information for quite some time now.”