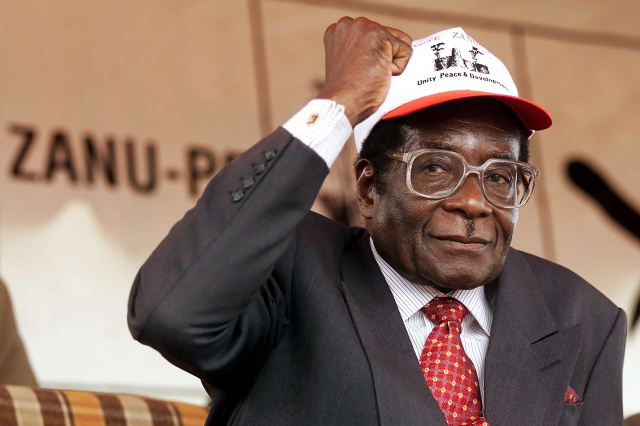 (FILES) In this file photo taken on June 8, 2000 Zimbabwean President Robert Mugabe clenches his fist as Zanu PF party praises him at a rally in the village of Mupandawana, some 230 km South of the capital Harare. Robert Mugabe, who led Zimbabwe with an iron fist from 1980 to 2017, has died aged 95, the country's president announced on September 6, 2019. (Odd ANDERSEN / AFP)

(AFP) - Robert Mugabe, the former guerrilla leader who held onto power in Zimbabwe for 37 years until forced out by the military with the economy mired in crisis, has died aged 95, the country's president announced Friday.

"It is with the utmost sadness that I announce the passing on of Zimbabwe's founding father and former President... Robert Mugabe," Emmerson Mnangagwa said in a tweet.

"Mugabe was an icon of liberation, a pan-Africanist who dedicated his life to the emancipation and empowerment of his people. His contribution to the history of our nation and continent will never be forgotten."

First heralded as a liberator who rid the former British colony of Rhodesia of white minority rule, Mugabe used repression and fear to rule until he was finally ousted by his previously loyal generals in November 2017.

Mugabe had been battling ill health, and after his humiliating fall from office, his stamina seeped away rapidly. He was hospitalised in Singapore for months for an undisclosed ailment, Mnangagwa had confirmed earlier this year.

No further details were immediately available about the circumstances of his death, or where he died.

Former information minister Jonathan Moyo and a close ally of Mugabe tweeted "a dark cloud has enveloped Zimbabwe and beyond."

"Words cannot convey the magnitude of the loss as former President Mugabe was an elder statesman, a freedom fighter and a Pan-Africanist who played a major role in shaping the interests of the African continent.

"Indeed, we will remember former President Mugabe as a man of courage who was never afraid to fight for what he believed in even when it was not popular."

"Throughout his life, he firmly defended the sovereignty of his country, opposed foreign interference, and actively promoted China-Zimbabwe and China-Africa friendship and cooperation," foreign ministry spokesman Geng Shuang said.

The Mugabe years are widely remembered for his crushing of political dissent, and policies that ruined the economy.

The former political prisoner turned guerrilla leader swept to power in the 1980 elections after a growing insurgency and economic sanctions forced the Rhodesian government to the negotiating table.

In office, he initially won international plaudits for his declared policy of racial reconciliation and for extending improved education and health services to the black majority.

But that faded as rapidly as he cracked down on opponents, including a campaign known as Gukurahundi that killed an estimated 20,000 dissidents.

The violent seizure of white-owned farms turned Mugabe into an international pariah -- though his status as a liberation hero still resonates strongly in most of Africa.

All along, the Mugabe regime was widely accused of human rights violations and of rigging elections.

The topic of his succession was virtually taboo during Mugabe's decades-long rule, and a vicious struggle to take over after his death became clear among the ruling elite as he reached his 90s and became visibly frail.

But as his health weakened, the military finally intervened to ensure that his second wife Grace's presidential ambitions were ended in favour of their own preferred candidate, Mnangagwa, Mugabe's vice president.

Mnangagwa took over in November 2017, and he went on to be elected in disputed elections in July last year.

"He was a liberator of this country who became its destroyer in his later years due to his policies.

"He put in place policies that made Zimbabwe a laughing stock of the world. If he had left in his heyday he would have died a great statesman."

Ibbo Mandaza, the head of a political think tank Southern African Political and Economic Series, said: "We will remember him as a founding father along with (Tanzania's Julius) Nyerere, (South Africa's Nelson) Mandela and Joshua Nkomo.

"Unlike Nyerere and Mandela he stayed on. He would have had a much favourable obituary if he had left earlier", he told AFP.