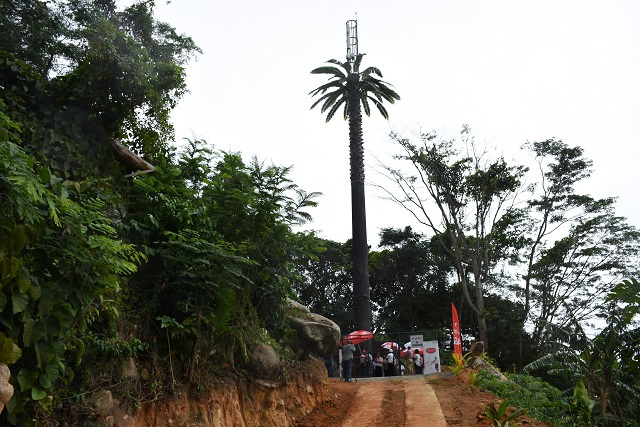 The 30 metre-long structure built in the shape of a palm tree was unveiled on Friday at Anse Francois in the Pointe Larue district. (Jude Morel)

(Seychelles News Agency) - Airtel Seychelles, a local telecommunications company, has unveiled a new tower built to boost connectivity on the eastern side of the main island of Mahe.

The 30 metre-long structure built in the shape of a palm tree was unveiled on Friday at Anse Francois in the Pointe Larue district.

Airtel’s managing director, Amadou Dina, said the new structure has been built following several complaints about the quality of the network in the area.

“We wanted to address their concerns and at the same time have something that was unique. We didn’t want to have a big steel tower that is usually the norm but rather something that blended well with the environment,” said Dina.

The tower provides coverage for over 30 kilometres and is expected to greatly improve service in the area.

The local Planning Authority’s antenna policy makes provision for buildings and related structures to as much as possible to use materials, colours, textures, innovative camouflaging techniques and landscaping that will blend the tower facilities to the natural settings and built environment.

The principal secretary of the Department of Information, Communications and Technology, Benjamin Choppy, told SNA that “since this is a requirement in the planning authority’s policy, we at DICT ensures that for any new towers in the country, the operators respect the policy and have these tree-like structures that blend with our environment.”

Airtel plans to have four of these environmentally-friendly structures -- two on the main island Mahe and two on Praslin, the second most populated island.

The company said a second on Mahe located in Morne Blanc on the western side of the island, has already been installed and will begin operating soon.

The project for the tower at Anse Francois was approved in 2016 and work to build the structure started in April 2018.

The company’s technical director, Papus Mifundu, explained that at first glance, the structure looks like a tree, with brown bark made out of a plastic material called Teflon whereas the green leaves which resemble palm leaves are also made of plastic.

“This tower is costly -- we are talking more than $300,000 per unit. So we have to carry out maintenance every five years to make sure the leaves don’t fall off and that the structure remains in good condition,” says Mifundu.

He added that Airtel “don’t really expect a return of investment soon but we are doing for the long term. First, we want to serve the community, bring coverage and also align with the planning regulations.”

The Department of Information, Communication and Technology said that following a new tower-sharing policy, other telecommunications company will be able to share Airtel’s tower if the need arises.

Seychelles, an archipelago in the western Indian Ocean with a population of 95,000, has two main telecommunications service providers, Cable and Wireless Seychelles and Airtel Seychelles.

The island nation is known for its pristine and well-protected environment and the country ensures that as much as possible, major development does not affect the environment.