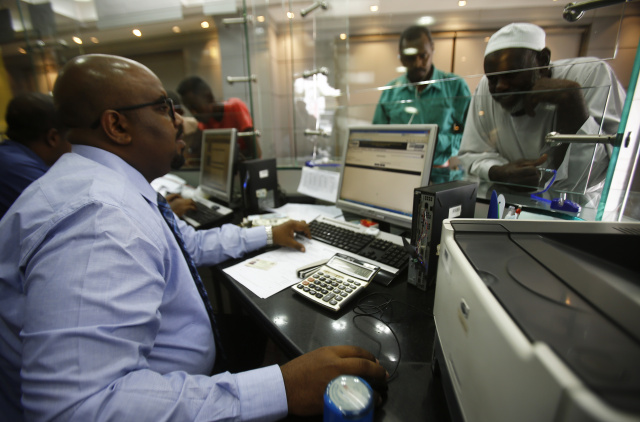 A dealer works at a foreign exchange office in central Khartoum on October 12, 2017, after the lifting of the US trade embargo came into effect. Sudan's central bank said it had received its first overseas fund transfer in US dollars since Washington announced the lifting of a 20-year-old trade embargo against Khartoum. (ASHRAF SHAZLY / AFP)

(AFP) - The three African non-permanent members of the UN Security Council called Tuesday for the lifting of sanctions against Sudan as the country transitions towards civilian rule.

In a joint statement, South Africa, Ivory Coast and Equatorial Guinea, as well as the UN representative from the African Union (AU), noted that the AU's Peace and Security Council had already lifted its sanctions against Sudan in light of the country's latest political developments.

The statement urged Security Council members to "follow suit" and "lift all sanctions against Sudan, including withdrawing it from the list of countries supporting terrorism."

The last point is a reference to Washington's blacklist of state sponsors of terrorism, which has included Sudan since 1993 and is a key factor hindering the African country's economic revival.

The statement also addressed Sudan's new government -- the country's first since nationwide protests that overthrew autocrat Sudan al-Bashir -- and urged it to work toward "lasting peace and stability."

"We urge the new Government of Sudan to observe and faithfully implement the provisions of the road map as agreed and ultimately hold free, fair and transparent parliamentary and presidential elections," the statement said.

The UN Security Council has imposed a host of sanctions against Sudan since 2005, including travel bans and asset freezes on parties involved in the 2003 conflict in the western Darfur region.