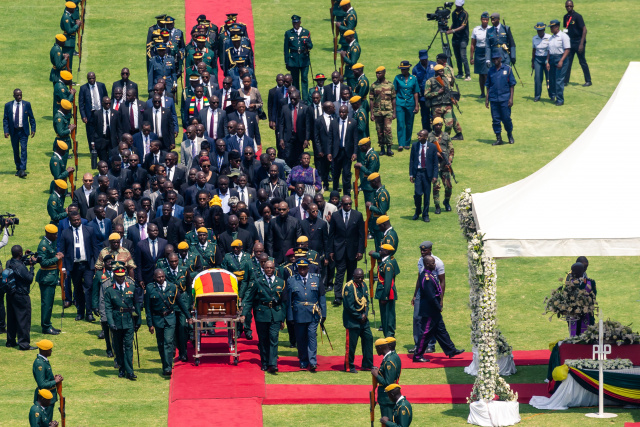 Officials accompany the coffin of Zimbabwe former president Robert Mugabe at the start of his official funeral ceremony at the National Sports stadium in Harare, on September 14, 2019. Former Zimbabwe leader Robert Mugabe will be given a state funeral on September 14, 2019 with a dozen African leaders expected to pay tribute to a man lauded as a colonial-era liberation hero. Mugabe, who died last week in Singapore aged 95, left Zimbabwe torn over the legacy of his 37-year rule marked by brutal repression and economic crisis.(Jekesai NJIKIZANA / AFP)

(AFP) - Zimbabwe gave former president Robert Mugabe a state funeral on Saturday with African leaders paying tribute to a man lauded as a liberation hero but whose 37-year rule was defined by repression and economic turmoil.

Mugabe, who died in Singapore last week aged 95, left Zimbabwe deeply torn over his legacy as the country still struggles with high inflation and shortages of goods after decades of crisis.

He died on an overseas medical trip almost two years after former army loyalists forced him out in 2017, following a power struggle over what was widely perceived as a bid to position his wife Grace as his successor.

Mugabe's casket, draped in the green, black, gold and red Zimbabwe flag, was marched slowly into Harare's national stadium as a military band played and crowds chanted and drummed, though less than half of the 60,000 seats appeared taken.

African leaders and senior officials from Cuba, Russia and China all praised Mugabe as a pan-African hero for his past as a colonial-era guerrilla leader.

"We honour and remember our African icon. He had many allies and followers... Our motherland is in tears," Zimbabwe President Emmerson Mnangagwa said.

Doves were released over the stadium before soldiers fired a 21-gun salute from artillery cannon.

Mnangagwa, a former Mugabe ally who turned against him, praised Grace in a signal of reconciliation, and called for sanctions on Zimbabwe to be lifted in the post-Mugabe era.

"We say give our country a rebirth and a new start. Remove the sanctions now, we don't deserve them."

South African leader Ramaphosa's speech was briefly interrupted by jeers and whistles from the crowds until he apologised for recent xenophobic attacks on African migrants, including Zimbabweans, in Johannesburg.

As a former anti-colonial rebel, Mugabe is credited with helping to end white-minority rule in Zimbabwe.

But his nearly four-decade rule was marked by repression, the brutal silencing of dissent and violent seizure of white-owned farms, making him an international pariah.

Though still lauded as an African icon, at home many Zimbabweans will remember Mugabe more for the increasingly tyrannical rule and economic mismanagement that forced millions to flee the country.

Many are struggling to survive despite Mnangagwa's vows of more investment and jobs in the post-Mugabe era.

"The fruits of his tenure are the shortages. That is what we remember him for," said Steven, a consultant shopping near the stadium.

"He has made sure there is no opposition and he succeeded. There is no reason to go to his funeral."

A young Mugabe was once jailed in the former British colony Rhodesia for his nationalist ideas. But he swept to power in the 1980 elections after a guerrilla war and sanctions forced the Rhodesian government to the negotiating table.

In office, he initially won international praise for promoting racial reconciliation and for extending improved education and health services to the black majority.

"You can't talk about Zimbabwe without Bob. Zimbabwe is Bob. It took a man like Bob, his bravery, to get independence," said Norman Gombera, 57, a school principal in Harare. "Bob did his best under the circumstances. There is no country without a problem."

Always divisive in life, Mugabe's funeral arrangements were also caught up in a dispute between Mnangagwa and the family over where and when the former leader should be buried.

His final burial at a national monument will only happen after a new mausoleum is built in about 30 days. That decision was taken after his family ended a dispute with Mnangagwa over the date and place of the ceremony.

His family are still bitter over the role Mnangagwa played in his ouster and had pushed for Mugabe to be buried in his homestead of Zvimba, northwest of Harare.

A former guerrilla who fought alongside Mugabe against colonial forces, Mnangagwa was fired as first vice president by Mugabe in 2017. Mugabe had branded him a "traitor".

Soon after, protesters took to the streets and military officers pressured Mugabe to step down in what was widely seen as a struggle between Mnangagwa's faction and loyalists to Mugabe's wife Grace inside the ruling ZANU-PF party.

Mnangagwa himself is now under pressure to deliver in the post-Mugabe period. A fuel price hike this year prompted nationwide protests, triggering a crackdown on opposition and clashes with soldiers that killed 17 people.