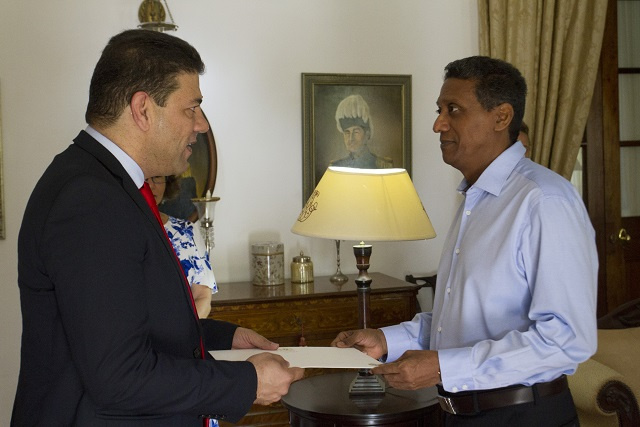 Hamdi Mansour Abuali, the new Ambassador-designate for the state of Palestine presenting his credentials to President Faure. (Mervyn Marie)

Hamdi Mansour Abuali, the new Ambassador-designate for the state of Palestine, conveyed his appreciation to the island nation for supporting their push for sovereignty while his Vietnamese counterpart -- Le Huy Hoang -- thanked Seychelles’ strong support for Vietnam in January 2020 to take up its mandate as a non-permanent member on the UN Security Council.

Both the Palestinian and Vietnamese presented their credentials to President Danny Faure on Tuesday at State House. They also paid courtesy calls to Vice President Vincent Meriton.

Speaking to the press, Abuali said that after 39 years the two countries have enjoyed good relations.

“We are still in a struggle to achieve sovereignty. We are in a struggle to have our independent sovereign state of Palestine. We are in conflict with the Israeli aggression and occupation of our land,” said Mansour Abuali, adding “the President insisted on the respect for the UN resolutions regarding Palestine. He insisted that the consensus of the international community is respected and that a Palestinian state is established.”

Abuali who is based in Dar Es Salaam, Tanzania hopes that collaborations in Agribusiness, health, training can be strengthened for the mutual benefits of both countries.

On his part, Hoang has used the opportunity to officially invite a Seychellois delegation headed by Faure to visit his country, adding that the two nations share a long-standing friendship.

Hoang said that trade, commerce, investment, and entrepreneurship development are areas where the island nation can collaborate with Vietnam.

“I come here and I see a lot of emerging potentials. In tourism, for instance, Vietnam has a population of 90 million with a growing GDP. So we see  great potential for Vietnamese tourists to visit Seychelles when they are touring the African continent.”

The ambassador added that as a medium economy country, Vietnam has many good quality products that have reached the European and American markets and which can also be traded in Seychelles – a group of 115 islands in the western Indian Ocean.

Ambassador Hoang is based in Maputo, Mozambique.