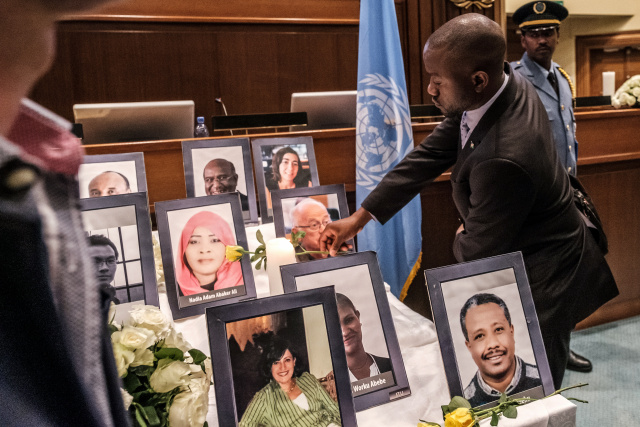 A man offers lays a flower at portraits of victims of the Ethiopian Airlines Boeing 737 MAX crash that killed 157 people one month prior hold flowers during a memorial service for UN and NGO personnel that died in the crash at the UN Economic Commission for Africa (UNCA) building in Addis Ababa, Ethiopia, on April 10, 2019. Aviation regulators around the world grounded Boeing's 737 MAX last month following the Ethiopian Airways crash, which came less than five months after an October Lion Air crash that killed 189 people. (EDUARDO SOTERAS / AFP)

(AFP) - A lawyer representing relatives of victims killed in an Ethiopian Airlines 737 MAX crash said Tuesday he was seeking documents from manufacturer Boeing and US regulators on the decision not to ground the aircraft after a previous deadly accident.

The October 2018 crash of a Lion Air 737 MAX in Indonesia killed 189 people, while 157 died in the accident in Ethiopia five months later.

The MAX's MCAS anti-stall system was implicated in both of the crashes.

Instead of ordering the grounding of the MAX after the Lion Air crash, the US Federal Aviation Administration issued an airworthiness directive reminding pilots of emergency procedures.

It also asked Boeing to provide a fix for the aircraft, which it was still working on at the time of the Ethiopian Airlines crash.

Clifford made the request at a hearing before a Chicago judge.

The law firm and Boeing "are now working on developing a protective order regarding the production of documents that deal with the design and development of the 737 MAX 8," the lawyer said in a statement.

He said the focus was on "what Boeing knew following the Oct. 29 Lion Air crash of the MAX 8 in the Java Sea and the MAX 8 crash in Ethiopia just a few months later."

Boeing said in a statement that it was cooperating with investigating authorities, while it declined to comment directly on the lawsuit.

The next hearing is scheduled for October 28, followed by another on November 21.

General » Be a reporter: Write and send your article » Subscribe for news alert
Tags: US, Ethiopia, aviation, Boeing