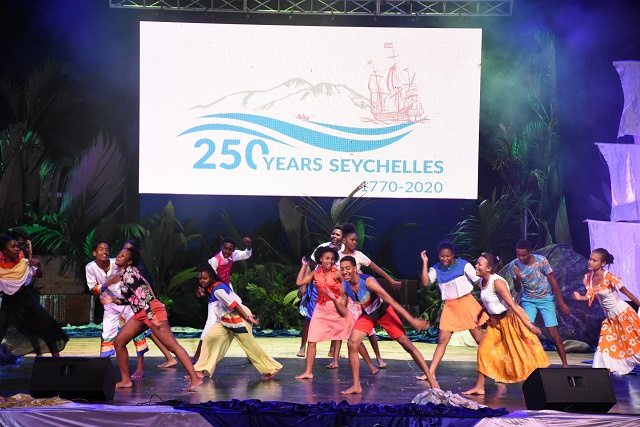 Part of the cultural performance at the launching on Tuesday. (Jude Morel)

President Danny Faure launched the celebration on Tuesday during a cultural performance at the International Conference Centre in the capital city of Victoria.

It was in August 1770 that a group of Europeans and their slaves arrived and made the very first settlement on Ste Anne – one of the inner islands of the archipelago in the western Indian Ocean archipelago. They were brought here on board a ship - the Telemaque - which remained as the surname of some Seychellois families.

The 15 French, seven Africans and five Indians were the foundation of a nation populated by the Creole people, a melting pot of cultures.

In August last year, President Faure set up a national preparatory committee for the anniversary. At the launching ceremony the chairperson of the committee, Sherin Francis, highlighted the colourful history of Seychelles and invited all Seychellois to be part of the celebrations.

“The celebrations remain a way for us to celebrate our beloved country and share with our next generations the real sense of the word patriotism,” said Francis.

The proposed activities endorsed by the Cabinet of Ministers in May this year will include activities geared for the whole population and will be held at both national and district levels.

Emanuel D’Offay another member of the committee, told journalists that all activities from now to the final day in August next year will be non-paying and will be held in open spaces to accommodate a maximum number of participants.

“The yearlong programme of activities has been carefully planned and will act as a catalyst to bring the Seychellois people together in unity and where differences will be put aside,” explained D’Offay.

The majority of the events will be held at the Freedom Square in Victoria on the main island of Mahe. According to D’Offay, this in itself is very symbolic. “We all know this area was created after the 1865 avalanche where mud and debris from the mountains reclaimed the area.’

Musical shows, as well as cultural performances and float parades, are on the programme. These will also be held at the district level where all districts will have their own activities planned.

On the second most populated island of Praslin, a monument will also be erected to commemorate the 250th anniversary of 115-island nation. Government ministries and departments will also participate where the different achievements of the nation will be showcased.

“For me, the biggest achievement that I think we, as Creoles, must celebrate and which must be highlighted during the coming year is the fact that we have remained the same. The same in terms of ethnicity. The people of Seychelles are Indians, Africans, and Europeans, a fusion known as Creoles living together, peacefully and in harmony,” local historian Tony Mathiot told SNA.

Mathiot said that after 250 years this is truly remarkable as the 27 settlers are truly represented in the 90,000 people who make the population of the island nation.