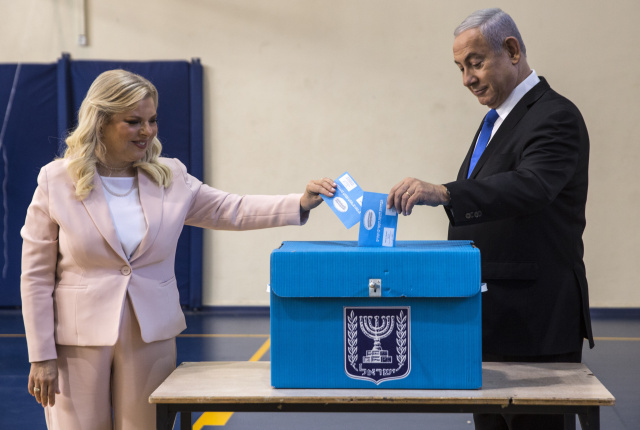 (AFP) - Prime Minister Benjamin Netanyahu and his main challenger Benny Gantz were deadlocked Wednesday after an Israeli general election, reports said, raising the possibility of a unity government or even the end of the premier's long rule.

Various Israeli media reported that Netanyahu's right-wing Likud and Gantz's Blue and White had 32 seats each of parliament's 120 with more than 90 percent of the vote counted.

The reports were citing sources with the elections committee, as that level of results had not been officially posted yet and were not expected before Wednesday afternoon.

The results gave no obvious path for either to form a majority coalition, raising the possibility of negotiations towards a unity government.

If the results hold, it will be a major setback for Netanyahu, who hoped to form a right-wing coalition similar to his current one as he faces the possibility of corruption charges in the weeks ahead.

With a hoarse voice and appearing haggard after days of intense campaigning, Netanyahu spoke before supporters in the early hours of Wednesday and said he was prepared for negotiations to form a "strong Zionist government."

He seemed to hint at openness to forming a national unity government, but did not specifically say so.

In his speech to supporters in Tel Aviv, Gantz called for a "broad unity government" but cautioned that he was waiting for final results.

"We will act to form a broad unity government that will express the will of the people," the former armed forces chief said.

"We will begin negotiations and I will speak with everyone."

On Wednesday morning when journalists approached him as he was on his way for a run, Gantz said "we'll wait for the final results ... and wish Israel a good unity government."

Netanyahu had not spoken in public since his early morning speech.

Ex-defence minister Avigdor Lieberman could prove to be kingmaker, with the reported results showing his nationalist Yisrael Beitenu with nine seats.

The mainly Arab Joint List alliance was set to become the third-largest bloc in parliament with 12 seats, the reports said.

That could put the Arab parties in a position to block Netanyahu from continuing as prime minister if they decide to break with precedent and endorse Gantz for the job.

Israel's Arab parties have traditionally not endorsed anyone for prime minister.

"The main difference in this vote is the turnout among Arab citizens," Joint List leader Ayman Odeh told journalists outside his home in the northern city of Haifa on Wednesday.

"There's no doubt that this is what made the difference. Without that, Netanyahu would already be prime minister."

After exit polls were released on Tuesday night, Lieberman called for a unity government with his party, Likud and Blue and White, saying the country was facing an "emergency."

The election was the second in five months for Israel, and President Reuven Rivlin, who must choose someone to form the next government, said there was a "need to avoid a third".

Netanyahu, Israel's longest-serving prime minister, suffered one of the biggest defeats of his political career after the previous elections in April.

His Likud along with its right-wing and religious allies won a majority, but he failed to form a coalition and opted for a second election rather than risk having Rivlin choose someone else to try.

The stakes could not be much higher for the 69-year-old Netanyahu, who many believe will seek immunity from prosecution in parliament should be survive as prime minister.

He spent election day warning he was on the verge of losing if his supporters did not turn out to vote, including in appearances at Jerusalem's main market and its central bus station, wielding a megaphone to exhort the crowds.

He repeatedly warned, as he has in previous elections, that left-wing and Arab voters were showing up in large numbers to vote him out, appearing on Facebook live to do so.

A campaign by Lieberman to "make Israel normal again" appeared to have resonated with voters.

The staunch secularist has long campaigned against what he sees as the undue clout of ultra-Orthodox Jewish parties, which he accuses of seeking to impose Jewish religious law on Israel's secular population.

Lieberman has demanded legislation to make military service mandatory for the ultra-Orthodox as for other Jewish Israelis -- a demand he refused to drop after April polls, eventually blocking Netanyahu's efforts to form a coalition.