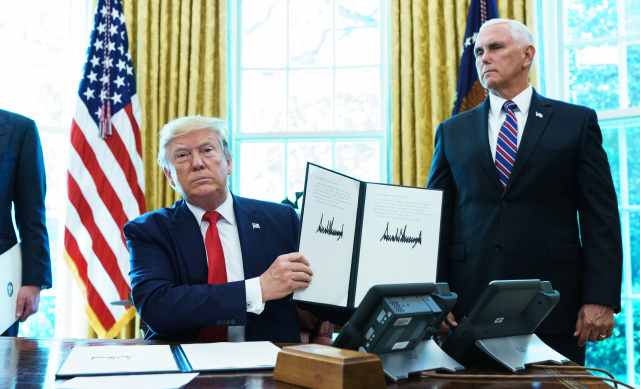 US President Donald Trump shows an executive order on sanctions on Iran's supreme leader in the Oval Office of the White House on June 24, 2019. (MANDEL NGAN / AFP)

(AFP) - Ongoing US sanctions on Iran target Supreme Leader Ayatollah Ali Khamenei and the Islamic republic's top brass, while also seeking to choke trade in a variety of goods from oil to carpets.

US President Donald Trump on Wednesday promised details of new sanctions within 48 hours in response to a missile or drone attack on Saudi oil facilities that Riyadh has blamed on Iran.

New sanctions imposed in June built on a series of previous ones.

Last November, six months after Trump withdrew from the nuclear deal with Iran, the United States took aim at its oil exports and financial transactions.

Specific actions targeted Iran's banking, shipping and energy sectors, threatening penalties against companies, even those of US allies in Europe and elsewhere, that do business in them.

In May, in a bid to further choke off oil exports, Iran's top foreign exchange earner, the United States lifted exemptions granted to eight countries, including Turkey and India, allowing them to purchase Iranian oil.

The sanctions last year brought back punitive measures that were imposed and then lifted by former president Barack Obama, who reached an international agreement under which Iran moved to end its nuclear programme.

On August 7, 2018, the first sanctions lifted under the 2015 nuclear deal came into force, banning:

- The Iranian government's purchases of dollars, or the international buying and selling of significant sums of rials, Iran's currency under pressure

- Trade in gold or other precious metals, aluminium, steel, carbon or graphite

- US imports of Iranian carpets or foodstuffs

Under the sanctions, any foreign institution that does business with Iran's central bank or other banks in the country loses access to the US financial system.

The risks for foreign banks are high in a globalized economy in which the dollar remains the dominant currency.

The United States has also sought to cut off Iranian access to SWIFT, the international system of interbank transfers.

General » Be a reporter: Write and send your article » Subscribe for news alert
Tags: US, Iran, diplomacy, sanctions, economy