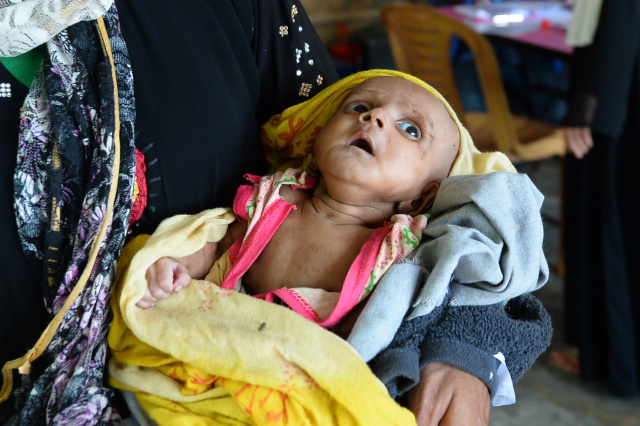 This photograph taken on July 23, 2019, shows a mother holding her newborn baby who is suffering various physical problems including severe respiratory disease at a field hospital in a Rohingya refugee camp in Ukhia in southern Bangladesh. Childbirth in the squalid Rohingya camps in southern Bangladesh is complicated by a lack of facilities and trained medical staff, with many women having to give birth in shanty tents accompanied by traditional midwives. (Munir UZ ZAMAN / AFP)

Since the turn of the century, the number of deaths among children under the age of five has been cut almost in half to some 5.3 million worldwide last year.

Almost half of those deaths occurred during the first month of life, meaning that around 7,000 newborns still died every single day last year.

While this marks a huge improvement, some 800 women still died each day from complications in pregnancy and childbirth in 2017, the UN numbers showed.

In all, the statistics reveal that an estimated 2.8 million women and newborns die every year, mostly from preventable causes.

"Around the world, birth is a joyous occasion. Yet, every 11 seconds, a birth is a family tragedy," head of the UN children's agency Henrietta Fore said in the statement.

"A skilled pair of hands to help mothers and newborns around the time of birth, along with clean water, adequate nutrition, basic medicines and vaccines, can make the difference between life and death," she insisted.

"We must do all it takes to invest in universal health coverage to save these precious lives."

The reports showed that stark inequalities persist around the world in accessing the services and care needed to ensure safe childbirth.

Sub-Saharan Africa has the most dire situation, with levels of maternal deaths nearly 50 times higher than in high-income countries, and with babies there 10 times more likely to die than in wealthier parts of the world.

In 2018, one out of every 13 children in the region died before their fifth birthday, compared to one in 196 children in Europe, the UN numbers showed.

At the same time, one out of every 37 women in sub-Saharan Africa dies in childbirth. By comparison, only one out every 6,500 women in Europe have a lifetime chance of dying in childbirth.

Under the Sustainable Development Goals, the world has committed to trying to bring the global maternal mortality ratio to below 70 deaths per 100,000 live births by 2030.

But the UN warned that at the current pace, the world will miss that target by more than one million lives.

While rates have generally trended downwards, the UN figures showed that the maternal mortality ratios actually increased in 13 countries between 2000 and 2017.

A number of those countries were places facing conflict or crisis, such as Syria and Venezuela.

But the United States actually showed the greatest increase, with the ratio soaring by 58 percent over the 17-year-period to 19 deaths for every 100,000 live births.

Many countries have already reached that target, but more than 50 nations are lagging far behind.