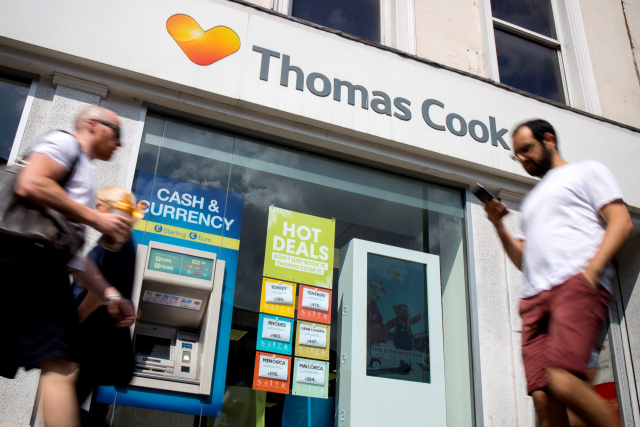 (FILES) In this file photo taken on July 12, 2019 pedestrians walk past a branch of a Thomas Cook travel agent's shop in London. Tour operator Thomas Cook has confirmed it is seeking £200 million in extra funding as it attempts to prevent a collapse on September 20, 2019. (Tolga Akmen / AFP)

Thomas Cook said in a statement that it needed £200 million ($250 million, 227 million euros) -- in addition to the £900-million rescue deal secured last month that handed control of its tour operator business to Chinese peer Fosun.

Sources said a collapse of the group, which some reports said could come as soon as the weekend, would mean the repatriation of 600,000 tourists, including 150,000 seeking government help returning to the UK.

"We can confirm that a contingency plan exists to deal with this situation," Richard Taylor, spokesman for Britain's Civil Aviation Authority told AFP.

"We cannot discuss the details of this plan but we have run similar operations in the past."

The 178-year-old company has approached a range of potential investors including the UK government, a source close to the matter told AFP, confirming a report in the Financial Times.

The government at the time described it as Britain's "biggest-ever peacetime repatriation".

A fresh recapitalisation for Thomas Cook "is expected to result in existing shareholders' interests being significantly diluted, with significant risk of no recovery", the company said Friday.

Shares in Thomas Cook, which have collapsed already in recent months, lost around 23 percent of their value on Friday, standing at just 3.4 pence.

"The travel group is at risk of collapsing if it doesn't receive the financing," noted David Madden, analyst at trading group CMC Markets UK.

Thousands of workers could also lose their jobs, with Thomas Cook employing about 22,000 staff worldwide, including 9,000 in Britain.

Fosun, which was already the biggest shareholder in Thomas Cook, agreed last month to inject £450 million into the business.

In return, the Hong Kong-listed conglomerate acquired a 75-percent stake in Thomas Cook's tour operating division and 25-percent of its airline unit.

Creditors and banks agreed to inject another £450 million under the recapitalisation plan announced in August, converting their debt in exchange for a 75-percent stake in the airline and 25 percent of the tour operating unit.

Announcing Friday the need for more funds, Thomas Cook said: "Discussions to agree final terms on the recapitalisation and reorganisation of the company are continuing between the company and a range of stakeholders, including its largest shareholder, Fosun Tourism Group."

Thomas Cook in May revealed that first-half losses widened on a major write-down, caused in part by Brexit uncertainty that delayed summer holiday bookings. The group, which has around 600 stores across the UK, has also come under pressure from fierce online competition.