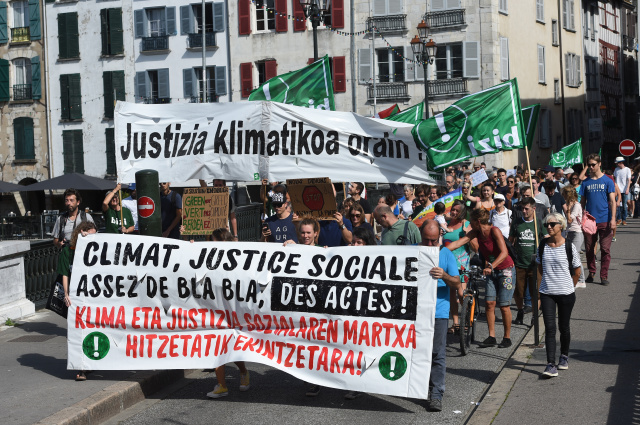 (AFP) - On Monday, Secretary-General Antonio Guterres will position himself on the frontline against climate change as he presides over a UN emergency summit, a role some say he turned to after difficulties in resolving global conflict.

Speaking about rising temperatures, the 70-year-old recently told journalists, smiling discreetly: "I don't pretend I rule the world. My main objective is to make as much noise as I can."

In May, he traveled to the South Pacific where rising sea level threatens entire island nations and more recently to the hurricane-ravaged Bahamas, witnessing a devastation the likes of which he said he had never seen.

Mobilizing the globe's movers and shakers against climate change is paramount in the eyes of Guterres, who served as Portugal's prime minister from 1995 to 2002 and often mentions not wanting to leave his grandchildren a destroyed planet.

However the focus on climate change marks an evolution for Guterres, who arrived in the role in early 2017 under the belief that his predecessor, South Korea's Ban Ki-moon, had already achieved great things with the 2015 Paris climate accord.

"Guterres wanted to focus instead on crisis management," said Richard Gowan of the International Crisis Group, noting in the same breath that Guterres' "crisis management failed first in Cyprus, then this year in Libya."

In Libya, Guterres' humiliation was severe. He traveled to the country to personally advance prospects for a political solution, only to have one of the negotiating parties launch a deadly offensive to seize the capital of Tripoli in the wake of his departure.

The secretary-general's human rights efforts around the world have resulted in meager gains, with many NGOs believing he could do much more.

While the UN helped broker the end to a decades-old dispute between Greece and Macedonia, which resulted in the latter country's name change to the Republic of North Macedonia, little has come of efforts to halt conflict in Syria and Yemen or ethnic cleansing in Myanmar.

Potential conflict in the Middle East between the United States and Iran will dominate discussion at the General Assembly, where Guterres will adeptly work his skill at behind-the-scenes diplomacy to reduce tensions, in sharp contrast with his flashier center-stage efforts on climate change.

On a daily basis, Guterres, who sets his watch ahead by three-quarters of an hour -- deeply disturbing to some dignitaries who have visited him -- says he strives to manage jetlag and admits that he doesn't sleep on airplanes.

The practicing Catholic said that one of the difficulties of his job is doing "everything I can for the billions of people that live in very difficult circumstances in the world."

It's these sorts of interpersonal skills that have earned him praise from the majority of ambassadors working at the UN.

Even amid a push by US President Donald Trump to slash UN funding, Guterres has persevered, only just beginning to make sense of an organization he might like to head for a second term.