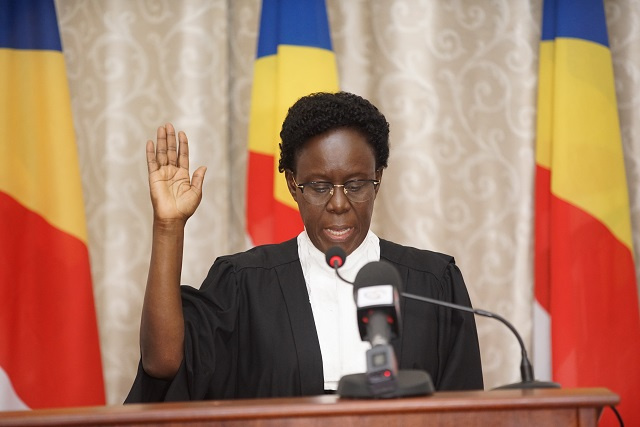 Lillian Tibatemwa-Ekirikubinza was sworn-in to Court of Appeal of Seychelles on Monday, September 16, at State House. (Mervyn Marie)

(Seychelles News Agency) - The Seychelles’ Constitutional Appointment Authority (CAA) said that the correct procedures have been followed to appoint a Ugandan Judge to the island nation’s Court of Appeal, despite the appointment being met with controversy in Uganda.

Speaking to SNA, the executive secretary of CAA, Iqbal Ibrahim, said on Monday that due diligence has been done for the appointment of Lillian Tibatemwa-Ekirikubinza as justice of appeal.

“We have advertised the position on the Commonwealth website, which is part of the requirements. It is her responsibility to inform the institution that she is working for about her post in Seychelles,” said Ibrahim.

According to an article by a Ugandan news service, Daily Monitor, Uganda’s Judicial Service Commission (JSC) has denied approving Supreme Court Judge Lillian Tibatemwa-Ekirikubinza the right to serve in the Seychelles’ court.

“We have not endorsed Justice Tibatemwa to join the Seychelles’ court. We just learnt of it through social media yesterday [last week]. So, this is contrary to what I am reading in the papers that JSC, which is her employer, had approved her move,” a source in Uganda's Judicial Service Commission told the Daily Monitor.

Ibrahim said that the Authority has acted on a letter of recommendation sent by the chief justice of the Institutions where Tibatemwa-Ekirikubinza is working in Uganda.

“She is going to attend sitting three times a year whenever the court convenes. She will still handle cases back home and this will not cause any legal issues,” he added.

Tibatemwa-Ekirikubinza a was sworn in last Monday as the fourth justice of appeal in Seychelles, an archipelago in the western Indian Ocean.

She was appointed by the President of Seychelles, Danny Faure, on recommendations made by the Constitutional Appointments Authority pursuant with Article 123 of the Constitution of the island nation.

Tibatemwa-Ekirikubinza holds a PhD in law from the University of Copenhagen and was the first African woman to graduate with a PhD in law. She joined the judiciary in Uganda in July 2013 as Justice of the Court of Appeal and Constitutional Court. She is also a highly experienced and widely researched legal scholar in judicial and legal matters.

Other Ugandan judges who have worked in Seychelles are Justice Duncan Gaswaga and Justice Fredrick Egonda Ntende, with the latter having served as the country’s chief justice.