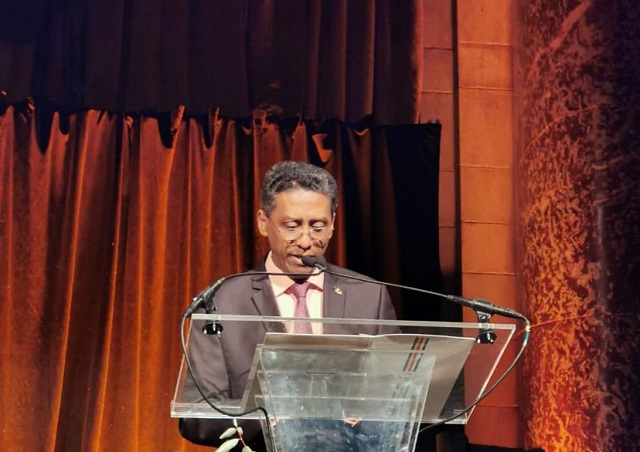 Faure made the statement in an address at the launch of the High Ambition Coalition for Nature and People hosted by Costa Rica. (State House)

(Seychelles News Agency) - Seychelles is honoured to join a newly launched coalition pushing for the ambitious target for the protection of 30 percent of the planet Earth by the end of the next decade, President Danny Faure said in New York on Monday.

Faure made the statement in an address at the launch of the High Ambition Coalition (HAC) for Nature and People hosted by Costa Rica, State House said.

The launch of the High Ambition Coalition took place ahead of the 74th Session of the United Nations General Assembly. Faure and other world leaders attended a major climate summit in New York on Monday.

Faure said that Seychelles has already designated 26 percent of its Exclusive Economic Zone into marine protection areas and is on target to achieving the 30 percent by 2020.

“It is therefore only natural for us to join the coalition of countries that are pushing for the ambitious target for the protection of 30 percent of our planet by the end of the next decade,” he said.

Faure added that despite all the sustainable environment conservation action efforts made, resources to finance biodiversity and climate action are nowhere near enough. He stressed how crucial it is for countries to find new and innovative methods of financing for nature, for conservation work and for sustainable utilisation of marine resources.

“We need to give a boost to nature if we are to recover from the tremendous loss of biodiversity and achieve the Paris agreement target on climate. Decisions we take as leaders can help shape the future of our planet,” he said.

The head of state of Seychelles, an archipelago in the western Indian Ocean, urged countries to raise their levels of ambition in order to achieve the global targets set for climate and biodiversity.

Faure stressed the important need for the world to go back to nature for solutions that will ensure the future sustainability of our planet. He highlighted some of the actions taken in Seychelles centred on the protection of nature, healthy ecosystems and biodiversity.

The Seychelles’ president had also been expected to deliver a statement on Monday at the Climate Summit hosted by the UN Secretary-General.

The President will also attend several important high-level events including the UN High-level Political Forum on Sustainable Development (HLPF), a dialogue on financing for development, and a high-level meeting to review progress made in addressing the priorities of Small Island Developing States.