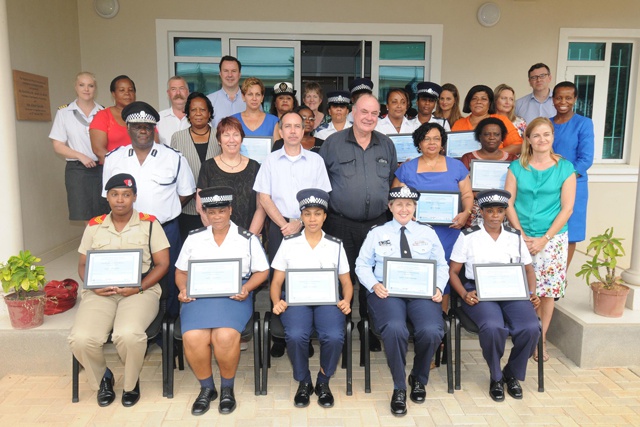 A group of Seychelles police officers and other officials at the launch of the ‘Seychelles Women in Police Network’. (Joena Bonnelame, Seychelles News Agency)

(Seychelles News Agency) - While the majority of Seychelles police officers are men, the force also comprises of a good number of female officers across the ranks up to Superintendent level.

According to information provided to SNA by the police department, the Seychelles island with a population of around 90, 000 people have an 800 strong police force with women making up 39 percent of the force.

The over 300 female officers now have a new platform that will allow them to interact and share experiences amongst themselves as well as with other police forces worldwide following the launch yesterday of the ‘Seychelles Women in Police Network’.

Seychelles Criminal Investigation Unit, Superintendent Christel Marie told SNA that through the setting of this network, Seychellois female police officers will be able to develop themselves more fully in their field of work. She explained that the network exists in most Commonwealth police forces and in the region only Seychelles and neighbouring Indian Ocean island of Mauritius did not have their own.

The ‘Seychelles Women in Police Network’ was launched yesterday following the successful completion of a one day workshop held at the Regional Fusion and Law Enforcement Centre for Safety and Security at Sea (REFLECS3) in the Seychelles capital of Victoria.

“We women in the force are very keen on the network and now that those of us who participated in the workshop are more aware as to what it is really all about, we are in a better position to draw in more members of the force,” said Marie.

She explained that earlier this year two female officers attended the annual general meeting of such a network in the Pacific and that the network’s regional coordinator for Africa has also helped them with the logistics.

Speaking at the event, Coles said that gender equality is something on which her country’s government places much emphasis and it steadfastly formulates and implements policies aiming towards the empowerment of women and young girls.

The Seychelles Home Affairs and Transport Minister Joel Morgan, who is also responsible for the police force has given his full support to the initiative and said that the integration of all members, of the police force no matter their gender within its fold is vital to its success.

Seychelles women police officers are “…without doubt a very important and vital element and are key to the department’s overall success,” said Morgan when launching the Seychelles Women in Police Network.

Superintendent Marie told SNA that they are now working on a few formalities before they came really kick start their activities.

“We are now working on our constitution and terms of reference, which we will submit to the government for approval and from there we will start our activities,” she said.

The Seychelles police force is expecting the network to assist its female officers in acquiring more formal training in their respective fields so as to further develop their skills in strategy planning, management and leadership. Through the network they can also access funding for activities aimed at their empowerment.