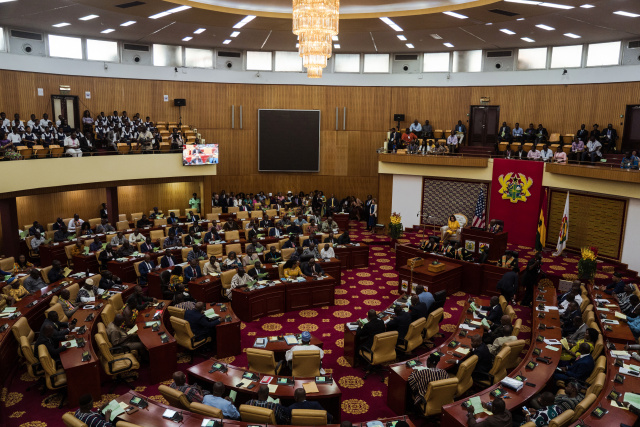 Speaker of Ghana's Parliament Mike Aaron Oquaye (R) welcomes US Speaker of the House Nancy Pelosi (L) at the Ghana's parliament, in Accra, on July 31, 2019 for a three-day visit to the country to mark the 400 years anniversary since the first slave shipment left the Ghana's coast for United States. US House Speaker Nancy Pelosi condemned the "grave evil" of slavery in a speech to Ghana's parliament marking 400 years since the first shipment of enslaved Africans to America. Pelosi was leading a delegation including members of the Congressional Black Caucus to the West African country, four centuries after the first slave ship arrived in Jamestown, Virginia from the continent. (Natalija GORMALOVA / AFP)

(AFP) - Ghana's security forces have arrested at least three suspects over an alleged plot to destabilise the government, the information minister said.

"The joint operation was to neutralise an elaborate plot targeted at the presidency, and with the ultimate aim of destabilising the country," Kojo Oppong Nkrumah said in a statement Monday.

He said those arrested last Friday included a medical doctor whose premises –- Citadel Hospital, in the capital, Accra -- were being used to manufacture weapons for the alleged plot.

The security agencies had been monitoring the activities of the suspects including their contacts with some soldiers over the past 15 months, he said.

"We also have in custody military persons and an officer in connection with these plots. We are not taking anything for granted in this case," Nkrumah told AFP by telephone from Washington on Tuesday.

He assured the public that "state security agencies remain vigilant, and will work to safeguard national security and public safety".

Ghana is viewed as a bulwark of stability in a region characterised by insecurity and turbulence.

The West African nation has been run by democratically elected governments since 1992 and is gearing to hold fresh polls late next year.

The statement on the alleged plot sparked further questions in the country.

Security analyst Festus Aboagyehe called for more information and warned that the authorities appeared too quick to conclude the suspects were plotting to destabilise the government.

"I cannot put words in the mouth of government but the agencies involved are expected to be professional enough to explain exactly what this group was about," the retired army officer told local media.

"I do not exactly understand what targeting the presidency means," he added.